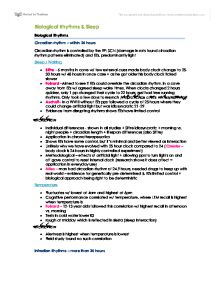 Biological Rhythms & Sleep Biological Rhythms Circadian rhythm - within 24 hours Circadian rhythm is controlled by the EP: SCN (damage in rats found circadian rhythm patterns eliminated) and EZs, predominantly light Sleep / Waking * Siffre - 6 months in cave w/ few external cues made body clock change to 25-30 hours w/ 48 hours in once case + as he got older his body clock ticked slower * Folkard -Aimed to see if EZs could override the circadian rhythm. In a cave away from EZs w/ agreed sleep wake times. When clocks changed 2 hours quicker, only 1 pp changed their cycle to 22 hours, rest had free running rhythms. Only took a few days to resynch (importance of EZs in resynching) * Aschoff- In a WW II without EZs pps followed a cycle of 25 hours where they could change artificial light but was idiosyncratic 21-29 * Evidence from disrupting rhythms shows EZs have limited control Evaluation * Individual differences - shown in all studies + Siffre idiosyncratic + morning vs. night people + circadian length + lifespan differences (also Siffre) * Application in chronotherapeuatics * Shows EZs have some control, but it's minimal and better viewed as interaction * Unlikely why we have evolved with 25 hour clock compared to 24 (Czeisler - body clock is 24 hours in highly controlled experiment) * Methodological - effects of artificial light + allowing pps to turn lights on and off gave control to reset internal clock (research shows it does affect = application in everyday use) * Miles - man had circadian rhythm of 24.9 hours, needed drugs to keep up with real world - evidence for genetically pre-determined & EZs limited control + biological approach being right to be deterministic Temperature * Fluctuates w/ lowest at 4am and highest at 6pm * Cognitive performance correlated w/ temperature, where LTM recall is highest when temperature is * Folkard - 12-13 year olds followed this correlation w/ highest recall in afternoon vs. ...read more.

Oliviero -the system that normally inhibits motor activity in SWS is not developed in children. Supported by sleep walkers having immaturity in neural circuits involved in motor excitability Factors -psych illnesses, stress, anxiety and some drugs. Longitudinal research from sleep centre showed link between sleep deprivation and walking. Baseline showed 50% SW vs. after deprivation 90% of them did + increase in episodes (only for those w/ predisposition) Evaluation * Sleepwalking starts in childhood when daytime sleeping stops (this contradicts evo) * Diathesis-stress model - genetic predisposition + maturity of neural circuits / SWS amount (which is in turn increased by other envi factors such as drugs and alcohol) Narcolepsy Disorder of sleep/wake cycle. Results in sudden uncontrollable attacks of REM sleep with variance in time. It involves daytime sleepiness and may not realise after microsleep they weren't awake. The other main symptom is sudden loss of muscular control triggered by strong emotions called cataplexy. Similar to REM, everything is functional but muscle control in body is lost. Other symptoms inc. hallucinations, auto behaviour and interruption of night time sleep marked by craving of sweets and physiological arousal. Usually starts in adolescence REM - Malfunction of REM due to association of hallucinations and muscle activity loss (cataplexy) HLA - mutation of the immune system where an increase of HLA was found in narcoleptics Hypocretin - Involved in regulating arousal. Dement - mice w/o hypocretin had narcolepsy + deliberate bred dogs w/ faulty hypocretin receptors also did. Levels of hypocretin in spinal fluid were near non-existent in human narcoleptics Genetics - 25% cc rate. Suggests environment plays a role Evaluation * REM theory supported by neuron activity in the brainstem of narcoleptic dogs when cataplexy occurred so did neuron activation only occurred in normal dogs during REM. Is however, a lot of disputes over this theory * The specific HLA variant found commonly in population and only minority of narcoleptics * Hypocretin best answer, but not genetic even though narcolepsy shown to be ...read more.