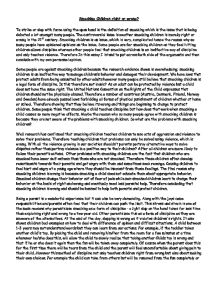 By picking the child and removing him/her from the room for a few minutes at a time whenever he/she does this, will allow the child to slowly realize that taking another Childs toy is wrong and that if he or she does it again then the fun will be taken away completely. Of course when the parent does this for the first time there will be tears from the child and the parent will feel uncomfortable about giving pain to their child. However this method of discipline not only teaches children right from wrong but also about making their own choices. For example the child can take from others but will be removed from the fun completely or choose to behave and continue to play. As a result of this child smacking is not needed any more as there are alternatives and therefore should be banned. Though this argument is strong other people believe against this argument and think that smacking children is an effective method of discipline. Other people believe this because of many reasons. The first is that smacking children is not ideal for the parent either but they do it because they love their children and want to raise their children with respect. ...read more.

Therefore allowing children to become out of control and able to break rules within society. After balancing out both sides of the arguments, which are both, very strong in their context. I can conclude that in my opinion-smacking children is wrong and should be banned to protect children and help parents. I think this because I feel that as we are growing more into the modern age than we should be able to find alternatives rather than carry out the old fashioned ways of discipline. Children are becoming more and more hard to control however we should look to help them rather than portray to them that violence is the answer. If children are shown that violence is acceptable than they too will carry out violence, which will turn the society, we live to be filled of violence, which is not good for anyone. Is it right that adult's d not want violence however are able to throw it at there children. Smacking children should be banned, as it will enforce rules within homes and society so that everyone is clear that the law is against smacking children. Further more it will outline that violence is wrong and can never be justified as right. ...read more.

The writer has given a clear account of the arguments for and against smacking. They have a very nice writing style which flows well and shows that they have read around the subject. To improve the essay it is advisable to add references wherever comments are made to support an idea whether for or against smacking. The author's name should be given with the year of the study. However, despite this the writer has covered the main points very well.