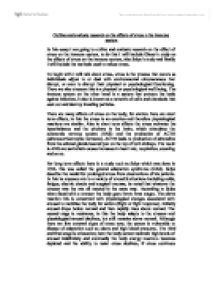 Stress on the immune system

Outline and evaluate research on the effects of stress n the immune system In this essay I am going to outline and evaluate research on the effect of stress on the immune system, to do this I will include Glaser's study on the effects of stress on the immune system, also Selye's study and finally I will include the methods used to reduce stress. To begin with i will talk about stress, stress is the process that occurs as individuals adjust to or deal with environmental circumstances that disrupt, or even to disrupt their physical or psychological functioning. There are also stressors this is a physical or psychological well being. The immune system on the other hand is a system that protects the body against infection, it also is known as a network of cells and chemicals that seek out and destroy invading particles. There are many effects of stress on the body, for starters there are short term effects, in this the stress is an emotion and therefore physiological reactions are similar. Also in short term effects the stress activates the hypothalamus and the pituitary in the brain, which stimulates the autonomic nervous system (ANS) and the production of ACTH (adrenocorticotrophic hormone). ACTH leads to production of adrenaline from the adrenal glands located just on the top of both kidneys. The result is ANS arousal which causes increases in heart rate, respiration, sweating and so on. ...read more.

The finding were that NK cell activity was significantly reduced in the second round in the second blood sample, taken during their final examinations, compared with the first sample which was taken one month before their final examinations, NK cell activity was most reduced in participants who also reported high levels of life events and loneliness. Glaser concluded that examination stress reduces immune function, potentially leaving the individual vulnerable to illness infections, also that the immune function is also affected by psychological variables such as the stress of life events and feelings of loneliness. These long term stressors may make individuals more vulnerable to the added effect of short term stressors such as examinations. Overall this was essentially a correlated study, so a strong conclusion about a cause and effect relationship cannot be drawn, also it was a natural experiment using a natural source of stress and therefore had reasonable ecological validity, but the students may be a special group of generalization should be made with caution. Glaser also said even short term predictable and relatively benign stressors can increase vulnerability to illness. She included individuals who have stronger close personal relationships are less likely to show adverse immunological consequences when stressed, for example when she followed students through exams she found lonelier students had lower NK cell activity than those were not lonely. In Glaser's studies she said the most consistent gender differences occurred in response to material conflict, for instance she said the relationship between adverse hormonal and immunological changes, and negative or hostile behaviours, were stronger for women than men. ...read more.

The pituitary gland secretes hormones that control the other glands, the most important in the stress response being the adrenal glands which are responsible for producing the adrenaline rush which is often felt in stressful situations. There are many methods used to reduce stress, some methods are physiological while the other are psychological. Lazarus and Followman distinguished between problem and emotion focused strategies. There was direct action where the problem was focused, in some case the stressor can be removed. There is also other problems where you do something else to take you mind off the problem, there is also taking control this is where a person who feels in control suffers less harmful consequences of stress, another method used to reduce stress is biofeedback and relaxation where by the emotion is focused. Other emotion focused strategies are anxiolytic drugs such as Librium and Valium act directly on ANS and synapses. Stress management programmes such as time management or assertiveness training teach people to pace themselves better and avoid stress, while a physical activity and exercise promote better circulation which strengthens the heart, Goldwater and Collins found that exercise was positively to decrease anxiety. In conclusion I have realised that stress has an effect on the body both mentally and physically, this could alter the perception of the way the person see life. Glaser found that certain stress reduces the immune function, potentially leaving the individual more vulnerable to the illness and infections, she also verifies that the immune functions is also affected psychological variables such as stress of life event and feelings of loneliness. ...read more.