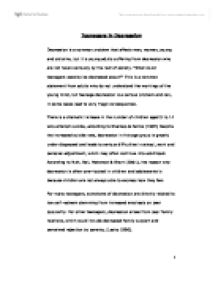 Teenagers in Depression Depression is a common problem that affects men, women, young and old alike, but it is young adults suffering from depression who are not taken seriously by the rest of society. "What could teenagers possibly be depressed about?" This is a common statement from adults who do not understand the workings of the young mind, but teenage depression is a serious problem and can, in some cases lead to very tragic consequences. There is a dramatic increase in the number of children aged 5 to 14 who attempt suicide, according to Shamoo & Patros (1997) Despite the increased suicide rate, depression in this age group is greatly under diagnosed and leads to serious difficulties in school, work and personal adjustment, which may often continue into adulthood. According to Nutt, Bell, Materson & Short (2001), the reason why depression is often over-looked in children and adolescents is because children are not always able to express how they feel. For many teenagers, symptoms of depression are directly related to low self -esteem stemming from increased emphasis on peer popularity. For other teenagers, depression arises from poor family relations, which could include decreased family support and perceived rejection by parents, (Lasko 1996). "When parents are struggling over marital or career problems, or are ill themselves, teens may feel the tension and try to distract their parents." (Oster & Montgomery 1996) This 'distraction' could include increased disruptive behaviour, self-inflicted isolation and even verbal threats of suicide. The common view of depression is that it is a personal weakness or character flaw. Depression, however, is considered as a medical disorder and can affect thoughts, feelings, physical health, and behaviours. ...read more.

These kinds of behaviour young people have been taught from their parents over the years. If parents are ill or they can't cope with life, they take pills from the doctor instead of getting up and doing something about their situation. Teenagers watch this example and learn to do exactly the same thing, but quite often with illegal substances, and, without a doctor prescribing them, they are in a hopeless situation once the addiction or dependency takes hold. There is more sexual activity among teenagers today than at any other time in our history. By the time they leave school, 90% of teenagers are no longer virgins (Papolos 1997); this is not without its risks. Sexually transmitted diseases among teenagers have reached epidemic proportions. Sexual promiscuity, which is not only life changing, but also life-threatening in this age of AIDS and HIV. Sexual activity can become an antidote to the loneliness and isolation many teenagers feel. Sexual activity is often used as an attempt to deal with feelings of depression, to increase self-esteem by feeling wanted and to achieve intimacy. (Dowling et al. 1993) "Suicide among teenagers has skyrocketed 200% in the last decade. If we were talking about meningitis we'd call this an epidemic." (Shamoo & Patros 1997) Even this does not reveal the full scope of the problem, since it is believed that for every young person who takes his or her life, many more attempt to do so. Suicide has become the second leading cause of death among older teenagers. Adolescents are particularly at risk for suicide attempts because they progress through a variety of rapid developmental stages. Seriously depressed teenagers may often feel a sense of hopelessness. ...read more.

Even the death of a much-loved family pet can force a teenager into despair. There are also less obvious types of loss. For example, moving to a new neighbourhood which would mean leaving behind familiar surroundings and close friends. Even achieving a much-anticipated goal, such as leaving school, can trigger feelings of loss. Embarking on a new phase of life for these adolescents implies that they are to lose the comfort and security of the past. Then there are young people who endure some type of chronic illness, like diabetes or asthma. In such circumstance, the pain of being different from their friends may make a teenager feel as if they have lost a degree of normality. It is important to note that many youngsters face such losses without becoming entirely overwhelmed. They get sad, they cry, they grieve, they mourn, but in time they adjust. They appear to take on the pressures of life with an astounding resilience, yet there are some who succumb to the throes of depression. There are no easy answers for this as depression is a complex disorder. But some adolescents may be more vulnerable. "With the help of teachers, school counsellors, mental health professionals, parents, and other caring adults, the severity of a teen's depression can not only be accurately evaluated, but plans can be made to improve his or her well-being and ability to fully engage life" (Blackman, 1995) Young people today face a markedly different situation to their predecessors, and one that is still rapidly changing. Many of the changes experienced by most young people have been positive: most are better educated, wealthier, physically healthier and live longer. However, there are also changes, particularly in the nature of the labour market, family relationships and social structures, which means young people face new risks and challenges every single day. ...read more.