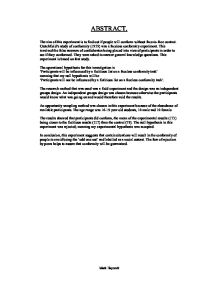 The aim of this experiment is to find out if people will conform without face-to-face contact. Crutchfield's study of conformity (1955) was a faceless conformity experiment.

The main extraneous variables were participant and situational variables. For instance, if the participants were of a big age gap, the results would not be accurate because of the many differences such as maturity and willingness to conform. Also, if the area changed where the participants were asked, different people would feel different each time e.g. more or less relaxed around familiar surroundings. One way that this was overcome, was firstly to choose participants from the same age range, that being 16-19 year olds, and to conduct the research in the same place throughout which was in the refectory at a college. Participants Opportunity sampling was chosen for this experiment because of the large amount of people to be able to select from, therefore being able to choose. Also, it is quite a quick way to select participants for an experiment. The participants that were used, were people from a college (students of age 16-19). 10 males and 10 females, (20 total) were used. The first five male and female participants were put into the control group and other participants after them were put into the experimental group. Apparatus and Material The first and foremost piece of apparatus that was needed for this experiment was to be the container of pasta and the actual dried pasta. All that was done to prepare and create this was simply count out 130 dried pieces of pasta and put them into the container. Also created, were standardised instructions and a consent form (Appendix 1+2) along with a guess sheet for the experimental group and a debriefing for both. (Appendix 3+4). ...read more.

Another factor that could have been a problem with this study is that there are many other people doing psychological experiments in the college. This causes problems because word gets around the college quite quickly and possible participants are then aware of experiments taking place. This could have an adverse effect on the results, as they understand what is expected of them. To try and counter this for future experiments, before the start of the experiment it would be helpful to firstly ask the participant if they were on the psychology course and then secondly if they had done any experiment so far or knew of any. If possible for further investigation, it would be interesting to study conformity on a larger scale with different surroundings to see the effects on people. For example, people's conformity to laugh at something 'supposedly' funny on the screen at the cinema. Thing such as the audience and venue could be changed for different results. The results from this experiment help us to understand people's emotions and the effect that peer pressure has on people. Also our ability to go with the group, even though it may be against our own wishes and beliefs. In conclusion, this experiment suggests that certain situations will results in the conformity of people to avoid being labelled 'the odd one out'. The fear of social rejection by peers helps to assure that conformity will be guaranteed. Also, the matter of peer pressure is a large one where's someone's views can go unnoticed in order to achieve a groups aim or belief. Further research can be carried out to find out if certain types of people conform or not, or if it is just a wide norm undergone by everyone. ...read more.