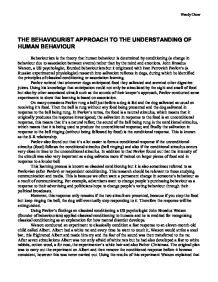 The Behaviourist Approach To the Understanding of Human Behaviour

THE BEHAVIOURIST APPROACH TO THE UNDERSTANDING OF HUMAN BEHAVIOUR Behaviourism is the theory that human behaviour is determined by conditioning (a change in behaviour due to association between events) rather than by the mind and emotions. John Broadus Watson, a US psychologist, founded behaviourism but it originated with Ivan Petrovich Pavlov's (a Russian experimental physiologist) research into salivation reflexes in dogs, during which he identified the principles of classical conditioning or association learning. Pavlov noticed that whenever dogs anticipated food they salivated and secreted other digestive juices. Using his knowledge that anticipation could not only be stimulated by the sight and smell of food but also by other associated stimuli such as the sounds of their keeper's approach, Pavlov conducted some experiments to show that learning is based on association. On many occasions Pavlov rung a bell just before a dog is fed and the dog salivated as usual on receiving it's food. Then the bell is rung without any food being presented and the dog salivated in response to the bell being rung. In Pavlov's terms, the food is a neutral stimulus, which means that it originally produces the response investigated; the salivation in response to the food is an unconditional response, this means ...read more.

At the same time that Pavlov was researching classical conditioning, Thorndike invented the puzzle-box to investigate how animals such as cats and dogs solve certain problems. He noticed that animals often repeated certain movements if they were successful or were linked with pleasurable consequences, as it leads them to a quick solution, therefore the quicker and better that movement is learned. Thorndike also studied learning in humans. He found out that like animals, being right (a positive result) helped students to maintain a correct response but being wrong didn't appear to eliminate mistakes. A US psychologist known as Burrhus Frederic Skinner then took up Thorndike's findings. Skinner was not convinced that all behaviour was based on reflexes, he argued that all behaviour is under the control of 'reinforcement' (reward and punishment) in other words we behave the way we do because of the results created by our past behaviour. However unlike Watson, Skinner never denied that heredity and inner process (for example a person's feelings and the mind) had a role in explaining behaviour. Skinner's research led him to develop the operant conditioning. Operant conditioning is also known as instrumental conditioning and it causes operant behaviour, which is basically a controllable and voluntary behaviour. ...read more.

His results have shown that children are more likely to imitate those who are similar to themselves, who are seen to be rewarded for their behaviour and those who have some kind of status (due to their possessions, strengths etc.). Bandura also recognised other factors that affected the extent to which the children imitated the models. These were if the encouragement is increased (i.e. offering a reward), then the children are more willing to copy the model and previous experience influences the attention paid to certain aspects of the model's behaviour. For example, those children who are used to violence are more likely to pay attention to violent aspects of the model's behaviour. Observational learning is also referred to as vicarious learning or imitative learning. This is because we copy what others do if we decide from observation that their behaviour will be rewarding. Bandura was quite sure that this learning could also be done symbolically through language (communication). For example, this is one way how parents pass on their attitudes onto their children. Therefore, as a result of his observations, Bandura concluded that learning doesn't take place only through direct reinforcement. ?? ?? ?? ?? Wendy Chow ...read more.