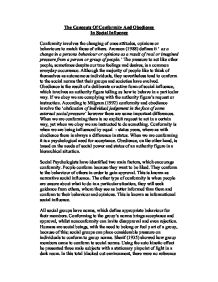 The Concepts Of Conformity And Obedience

The Concepts Of Conformity And Obedience In Social Influence Conformity involves the changing of ones attitudes, opinions or behaviours to match those of others. Aronson (1988) defines it ' as a change in a persons behaviour or opinions as a result of real or imagined pressure from a person or group of people.' The pressure to act like other people, sometimes despite our true feelings and desires, is a common everyday occurrence. Although the majority of people like to think of themselves as autonomous individuals, they nevertheless tend to conform to the social norms that their groups and societies have evolved. Obedience is the result of a deliberate or active form of social influence, which involves an authority figure telling us how to behave in a particular way. If we obey we are complying with the authority figure's request or instruction. According to Milgram (1992) conformity and obedience involve the 'abdication of individual judgement in the face of some external social pressure' however there are some important differences. When we are conforming there is no explicit request to act in a certain way, yet when we obey we are instructed to do something. Conformity is when we are being influenced by equal - status peers, where as with obedience there is always a difference in status. ...read more.

When the majority was only two confederates the conformity responses dropped significantly. Optimum conformity affects were found when there was a majority of three confederates. If the majority was raised above this number, no significant increases were found. According to Asch 'a unanimous majority of three is, under the given conditions, far more effective than a majority of containing one dissenter.' Some critics thought the high levels of conformity found by Asch were a reflection of American 1950's culture. Crutchfield quoted ' It was time - consuming and uneconomical and the tasks set were not like real life situations.' Other research indicates that conformity varies depending on the consistency of the confederates' judgements - the greater the consistency shown, the greater the conformity of the na�ve participant and vice versa. Cultural factors also play a part. Research on conformity in different countries has found some variations but in general there are quite high levels of conformity wherever research is carried out. After considering a fairly subtle approach to pressure, what exactly differs between conforming and obedience? There have been some controversial experiments on obedience and how people react to being given quite specific instructions. A famous example showing conformity and obedience was the experiment Zimbardo (1973) ...read more.

Milgrams work has been criticised both on ethical and methodological grounds. Baumrind (1964) believed that Milgram showed insufficient respect for his participants, there were insufficient steps taken to protect them, and his procedures could have long term effects on the participants. Orne and Holland (1968) argued that the participants did not believe they were giving electric shocks and they were just playing along with their role in the study. It is of some comfort to report that studies of the Milgram type have been carried out in other parts of the world with some quite different results. They have shown that obedience, in certain conditions, can be minimal. The main factor that enabled the individual to resist is if he had an experimental accomplice who refused to obey instructions as well. Just like in the Asch study if there is support from another individual, it can make a crucial difference. Conformity and obedience represents a form of social influence in which our peers or an authority figure steers us. What people can learn from all of this is pressure to conform or obey is not easy. Standing alone in social groups or cultures is a very difficult thing for most people. If there is no support, we need to look for it This seems to provide the strength to resist those in authority or group pressure if we are encouraged to question the motives of those who are steering us. ...read more.