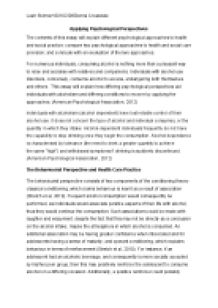 ﻿Leah Skinner100102206Donna Croasdale Applying Psychological Perspectives The contents of this essay will explain different psychological approaches to health and social practice; compare two psychological approaches to health and social care provision; and conclude with an evaluation of the two approaches. For numerous individuals, consuming alcohol is nothing more than a pleasant way to relax and socialise with relatives and companions. Individuals with alcohol use disorders, conversely, consume alcohol to excess, endangering both themselves and others. This essay will explain how differing psychological perspectives aid individuals with alcoholism and differing conditions to recover by applying the approaches. (American Psychological Association, 2012) Individuals with alcoholism (alcohol dependent) have lost reliable control of their alcohol use. It does not concern the type of alcohol and individual consumes, or the quantity in which they intake: Alcohol-dependent individuals frequently do not have the capability to stop drinking once they begin the consumption. Alcohol dependence is characterised by tolerance (the need to drink a greater quantity to achieve the same "high") and withdrawal symptoms if drinking is suddenly discontinued. (American Psychological Association, 2012) The Behaviourist Perspective and Health Care Practice The behaviourist perspective consists of two components of the conditioning theory- classical conditioning; which claims behaviour is learnt as a result of association (Stretch et al, 2010). Frequent alcohol consumption would consequently be performed, as individuals would associate positive aspects of their life with alcohol, thus they would continue the consumption. Such associations could be made with laughter and enjoyment, despite the fact that this may not be directly as a conclusion on the alcohol intake; maybe the atmosphere in which alcohol is consumed. An additional association may be having greater confidence when intoxicated and for adolescents having a sense of maturity; and operant conditioning, which explains behaviour in terms of reinforcement (Stretch et al, 2010). For instance, if an adolescent had an alcoholic beverage, and consequently is more socially accepted by his/her peer group, then this may positively reinforce the adolescent to consume alcohol on a differing occasion. ...read more.

(American Psychological Association, 2012) The psychodynamic approach to phobias includes two of the most distinguished approaches including desensitisation and flooding. Methodical desensitisation is a slow and gradual procedure in which an individual is introduced to trivial apprehensive, to severe apprehensive circumstances (American Psychological Association, 2012); ultimately concluding in the phobia being eradicated. The Humanistic Perspective and Health Care Practice In the case of alcoholism addicts, at a certain point, a natural inclination to grow and achieve a more fulfilling existence can over-power the causes of addiction. Nurturing these desires is far more effective in overcoming addiction than relying on the causes for answers. Take, for example, success rates of recovery in 12-step programs. Rather than focusing on the causes of addiction, or drawing the outlines for recovery from the cause, 12-step programs take a distinctly humanistic approach, encouraging individual to better themselves, their lives, and their communities. These programs rely on the addict's personal desire to better themselves and subsequently direct the individual in how to accomplish this. (American Psychological Association, 2012) Despite personal biology and environmental factors that teach an addict to deal with life by avoiding it, the humanistic perspective allows an addict to overcome these things by taking control of their choices and the behaviours that were detrimental to them. (American Psychological Association, 2012) Client-centered therapy, also known as Rogerian therapy, is a non-directive form of talk therapy that was developed by humanist psychologist Carl Rogers during the 1940s and 1950s. (About.com, 2012) According to major humanists like Carl Rogers and Fredrick Perls, individuals were born knowing how to be healthy and were naturally inclined to making healthy choices. These healthy natural impulses were thwarted by parents, teachers, religious leaders and other authorities acting on a variety of unhealthy (dysfunctional) culturally endorsed convictions, or from abusive motives. (American Psychological Association, 2012) The role of the therapist is to aid their service users to overcome their negative influences of authority and society or abusers and return to making their own healthy choices which would support their development. ...read more.

These aspects which are disregarded by the behaviourist theory are highlighted in additional approaches (Stretch et al, 2010), for example in terms of alcohol consumption; the behaviourist approach ignores the fact that alcohol is a drug, which would obviously have physical effects on the human body, whereas, this would be the main principal to the biological approach. (Stretch et al, 2010) The Biological Approach The methods used by the biological approach give its studies a high degree of reliability, validity and scientific credibility, which is enhanced by its focus on objectively observable phenomena rather than subjective experiences. Whilst most individuals regard this as a strength some would suggest that bio-psychologists neglect an crucial aspect of being an individual: their experiences. (Stretch et al, 2010) An objection to the biological approach would be its use of animal models as a basis for understanding human behaviour: given that each animal?s nervous system reflects its unique evolutionary function and history, it may not be possible to draw clear conclusions about human behaviour from studies of other animals. (Gross, 1991) A further objection to the biological approach could be that it tends to focus on genetic and biological influences on behaviour to the exclusion of social and cultural influences. Social psychologists would suggest that it is difficult to explain what individuals do without reference to their relationships with others, and many psychologists would suggest that culture, particularly in the forms of social learning and language, has a critical impact on thinking and behaviour that the biological approach tends to neglect. (Gross, 1991) However, it cannot be denied that the biological approach has contributed an enormous amount to our understanding of the fundamental processes of behaviour (Gross, 1991). It has also delivered into numerous other areas, including medicine and surgery (Stretch et al, 2010). Biological psychologists have provided explanations for a range of psychological disorders including depression and schizophrenia, and the drug therapies they have helped to develop have allowed many individuals to live normal lives that previously would not have been able to. (Gross, 1991) ...read more.