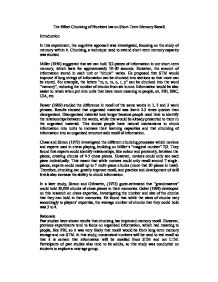 The Effect Chunking of Numbers has on Short-Term Memory Recall.

The Effect Chunking of Numbers has on Short-Term Memory Recall. Introduction In this experiment, the cognitive approach was investigated, focusing on the study of memory within it. Chunking, a technique used to extend short-term memory capacity was studied. Miller (1956) suggested that we can hold 7(2 pieces of information in our short-term memory, which lasts for approximately 10-30 seconds. However, the amount of information stored in each unit or "chunk" varies. He proposed that STM would improve if long strings of information can be chunked into sections so that more can be stored. For example, the letters "m, e, m, o, r, y" can be chunked into the word "memory", reducing the number of chunks from six to one. Information would be also easier to retain when put into units that have more meaning to people, ex. FBI, BBC, CIA, etc. Bower (1969) studied the difference in recall of the same words in 1, 2 and 3 word phrases. Results showed that organised material was learnt 2-3 times quicker than disorganised. Disorganised material took longer because people need time to identify the relationships between the words, while this would be already presented to them in the organised material. This shows people have natural mechanisms to chunk information into units to increase their learning capacities and that chunking of information into an organised structure aids recall of information. ...read more.

However, the sample used in this experiment may be harder to repeat in different locations as it was from a very small target population. Participants have to be from Park lane college and surrounding area so it cannot be repeated in other countries It also lacked internal reliability, as memory is a very subjective thing. We cannot go inside someone's head to read their thoughts and look through their memories. Therefore, it cannot be certain that results showed exactly what participants remembered, as they may leave out some information deliberately. Improving reliability This could be improved by increasing the sample size. More participants could be used so results are more representative of the target population, ex. using a sample of 50. However, the process of collecting data with such a big sample becomes more difficult, as it would be hard to control them and make them do the experiment in absolute silence. Appendices Appendix 1: Standard instruction Appendix 2: Debriefing Appendix 2: Debriefing Thank you for participating in this experiment. You have just participated in an experiment investigating the effects chunking has on information recall of the short term memory You may cancel your results if you wish to. If you have any queries about this experiment or wish to gain further information about this study, you are welcome to ask me. Good bye. ...read more.