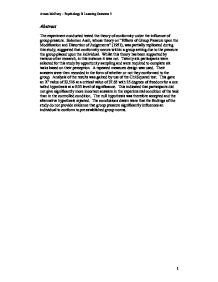 The experiment conducted tested the theory of conformity under the influence of group pressure.

Abstract The experiment conducted tested the theory of conformity under the influence of group pressure. Solomon Asch, whose theory on "Effects of Group Pressure upon the Modification and Distortion of Judgements" (1951), was partially replicated during this study, suggested that conformity occurs within a group setting due to the pressure the group placed upon the individual. Whilst this theory has been supported by various other research, in this instance it was not. Twenty-six participants were selected for this study by opportunity sampling and were required to complete six tasks based on their perception. A repeated measures design was used. Their answers were then recorded in the form of whether or not they conformed to the group. Analysis of the results was gained by use of the Chi Squared test. This gave an ?2 value of 23.516 at a critical value of 37.65 with 25 degrees of freedom for a one tailed hypothesis at a 0.05 level of significance. This indicated that participants did not give significantly more incorrect answers in the experimental condition of the task than in the controlled condition. The null hypothesis was therefore accepted and the alternative hypothesis rejected. The conclusions drawn were that the findings of the study do not provide evidence that group pressure significantly influences an individual to conform to pre established group norms. Introduction The field of study known as Social Psychology focuses on the idea that humans are social by nature and that interaction and exposure to others results in the social phenomenon referred to as social influence. These powerful, yet rarely recognised forces can be defined as interpersonal processes that lead to changes in the beliefs, feelings, or behaviours of another person (Forsyth, 1995). Other people can alter the way we think and act with subtle pressure and power, just as we can change their thinking and actions. Social influence takes many forms ranging from overt and obvious to covert and subtle. ...read more.

furthermore, the participant responds only after they have heard the others give their answers, and on the critical runs each one of the confederates gives the same incorrect response. Thus the participant hears a number of other people give what is for the participant an obviously wrong answer. Asch repeated this experiment with a number of modifications, but the basic result was that about a third of participants conform to the majority on nearly all trials, about a third stick to their guns and never conform, and about a third give conforming responses at least some of the time. Asch conducted several variations on this theme, for example varying the degree of consensus to be perceived amongst the accomplices (Asch,1955). His basic findings have often been replicated directly (e.g. Rosner, 1957) and using modifications of the experiment (e.g. Crutchfield's ingenious electrical booth apparatus for simulating a group's responses, thus removing the need for the great many confederates that Asch's work needed - Crutchfield, 1955). Once such powerful social influence under these apparently innocuous conditions became known, attempts were made to see what effect altering the conditions had: for example, using different tasks (more difficult or more complex) or different group conditions (increasing group attractiveness or cohesion, or the degree of acceptance by the group). Ross et al.(1976) gave a short review of these in the introduction to their paper. The usual conclusion was that by using such manipulations, manipulations that it might be argued made the experiments more natural, conformity could be greatly increased. So, Dittes & Kelley (1956) found that increasing acceptance by the group increased conformity to group norms, and Dittes (1959) later showed that conformity was particularly increased in those subjects with low self-esteem. To discover why the participants conformed, Asch simply asked them. He quotes at length the replies of one subject by way of example, a participant who Asch describes as an apparently self-confident and poised individual: "I did feel a responsibility to say what I saw in order to make the experiment valid .. ...read more.

It can therefore be seen that reasons for not conforming are as diverse as those for conforming behaviour. More recently, two other theories have been put forward to explain non-conforming behaviour: individualism, and control. Individualism is the wish to be distinguished in some way from others. Maslach claims that while we want to be like others generally, we still wish to remain individual in other respects, and will therefore sometimes risk the disapproval of the group. Participants who did not conform because of this need may not have actually been experiencing true independent behaviour. Rather, they may be experiencing anti-conformity, where their behaviour was still being determined by the group, but this would not have shown up in the results. Burger (1992) has demonstrated that people who score highly in desire for personal control are more likely to resist conformity pressures than those who have a low score, and this was tested using experiments. In real life situations, independence may be higher still, as some participants may have felt that they were playing the role that the situation demanded: they did not want to 'rock the boat' by offering a dissenting view. In addition, in real life situations, it is rare that advice or an opinion from an independent third party could not be sought, but this was impossible in Asch's experiment. Conclusion The experiment conducted tested the theory of conformity under the influence of group pressure. Upon analysis, the results showed that participants did not give significantly more incorrect answers in the experimental condition of the task than in the controlled condition. The null hypothesis was therefore accepted and the alternative hypothesis rejected at a 0.05 level of significance giving an ?2 value of 23.516. These findings do not support earlier findings by Solomon Asch (1951) and concludes that the Asch effect appears to be an unpredictable phenomenon rather than a stable tendency of human behaviour and that group pressure does not significantly influence an individual to conform to pre established group norms. ...read more.