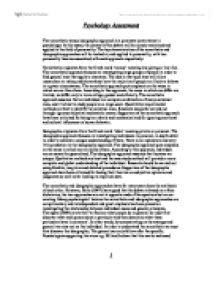 The nomothetic versus ideographic approach is a persistent controversy in psychology. In this essay, the content of the debate will be closely examined and applied to the field of personality. The key characteristics of the nomothetic and ideographic approaches will be looked at, and applied to personality, with two personality theories associated with each approach respectively. Nomothetic originates from the Greek word 'nomos' meaning law giving or law like. The nomothetic approach focuses on investigating large groups of people in order to find general laws that apply to everyone. The idea is that such laws will allow researchers to make predictions about how the majority of people are likely to behave in a given circumstance. The nomothetic approach puts emphasis on the ways in which we are like others. According to this approach, the ways in which we differ are limited; we differ only in terms of age, gender and ethnicity. The nomothetic approach assumes that an individual is a complex combination of many universal laws, and it is best to study people on a large-scale. Quantitative experimental methods are best to identify the universal laws. Research should be carried out through rigorous objective mechanistic means. Supporters of the nomothetic approach have been criticized for being too robotic and mechanical and for ignoring emotional and cultural influences on human behavior. ...read more.

Eysenck acknowledged that the majority fall between these extremes with only a few at the actual extremes of personality. Later on in his research, Eysenck theory evolved to a three factor model with extraversion, neuroticism, and psychoticism as the factors. Psychoticism, like the other two factors, was also used to describe a group of people at the extremes of personality, with the majority of people achieving low scores on this. Eysenck argued that individual differences in personality were largely the result of heredity, and theorised that these genetic differences resulted in differing physiological functioning.To measure extraversion and neuroticism Eysenck created a test called Eysenck's Personality Inventory (EPI), and eventually to measure all three dimensions he created Eysenck's Personality Questionnaire (EPQ); both of which were questionnaires with yes/no type answers i.e. 'forced choice questions'. Based on Eysenck chosen sample whether this theory can be applied to the rest of the population is rather questionable. Also, his use of questionnaires can be criticized as they themselves are fraught with problems. Eysenck's theory is clearly a nomothetic theory with no emphasis placed on the individual. Another trait theory associated with the nomothetic approach is that of Cattell's (1965). Using a Standard English dictionary, Cattell identified over 18,000 words relevant to the human personality and through observations of real life situations, questionnaires and objective tests etc Cattell reduced this list of words and discovered two distinct types of personaity traits. ...read more.

He stated that traits are idiosyncratic in three ways: a trait that is central for one person may be secondary to another, what makes a trait central or secondary is how strongly it influences the individuals behaviour, and no two people will be the same with a particular trait. According to Allport, it is this that makes it impossible to compare individuals. Allport is generally regarded as making a significant contribution to the study of personality. Although Allport puts himself across as a ideographic theorist his approach was not purely ideographic. Whilst emphasising the individuality and uniqueness of each personality, he also recognised the existence of some common traits that all people share in varying amounts. In conclusion, it has been revealed in this essay that the individual personality is very complex. It is therefore important to study the individual to understand personality and the ideographic approach is therefore vital. However, the individual cannot be studied without some acknowledgement of the nomothetic approach as nowadays the two approaches are co-existing. As argued by Holte, the two approaches are not separate. All description about a personal character involves some degree of generalisation. Krache (1992) stated that to explain human behaviour psychologists must seek a general theoretical framework that specifies the types of constructs that should be focused on and the types of relationships expected from these concepts. The ideographic approach therefore cannot be opposed to developing universal laws. Psychology Assessment 1 ...read more.