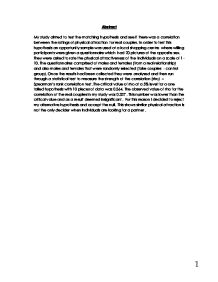 Abstract My study aimed to test the matching hypothesis and see if there was a correlation between the ratings of physical attraction for real couples. In order to test this hypothesis an opportunity sample was used at a local shopping centre where willing participants were given a questionnaire which had 20 pictures of the opposite sex. They were asked to rate the physical attractiveness of the individuals on a scale of 1-10. The questionnaires comprised of males and females (from a real relationship) and also males and females that were randomly selected (fake couples - control group). Once the results had been collected they were analysed and then run through a statistical test to measure the strength of the correlation (rho) - Spearman's rank correlation test. The critical value of rho at a 5% level for a one tailed hypothesis with 10 pieces of data was 0.564. The observed value of rho for the correlation of the real couples in my study was 0.327. This number was lower than the critical value and as a result deemed insignificant. For this reason I decided to reject my alternative hypothesis and accept the null. This shows similar physical attraction is not the only decider when individuals are looking for a partner. Introduction Physical attractiveness is characterised by many things and it is very often the reason for the formation of relationships. An individual may be attracted to certain features of another person's physical appearance. Examples which are relevant for females being attracted to males can include height and physique. Examples which are relevant for males being attracted to females can include: waist-hip ratio, body mass index (BMI), a youthful appearance and skin tone. The example of waist hip ratio mentioned which was relevant for a male to be attracted to a female provides a certain degree of support for a theory of relationship formation. Dr Devendra Singh (1993), an evolutionary psychologist from the University of Texas proposed that a female's waist-hip ratio was significant to male attraction and in turn the formation of a relationship. ...read more.

They will be told at the start they are free to stop participating and also withdraw their data at any time. Psychological harm: This could be an issue if the participants feel that they are ridiculed or judged on their rating of the pictures. When carrying out the study we will be making sure the risk of harm is no greater than the day to day risk. We will ensure that they cannot feel as if they are being judged on the ratings they give by giving them privacy and also asking them not to place their names on the questionnaire so that everything remains anonymous. Debriefing the participants after the study will also minimise any issues that arise. Lack of Informed consent: As the participants are being deceived it is not possible to gage fully informed consent as this would mean that their agreement should be based on the full knowledge of the nature and purpose of the study. Instead of fully informed consent, partially informed consent will be gained as the participants will receive some information about the study and the field we are investigating upon being approached. As the participants are being deceived, debriefing the participants on the true nature and purpose of our study after they have participated and also offering them the opportunity to remove their data from the results are both very important. These will help deal with the issue of informed consent Privacy: The privacy of the individuals in the photos could be an ethical issue as they do not know that they are being rated on their physical attractiveness. As the images were downloaded from a public domain (internet) meaning that when uploaded by the individual they knew that they would be open for anybody to look at and make their own judgements. As this is the case further action to deal with the issue will not be taken. ...read more.