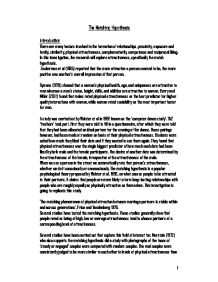 The Matching Hypothesis Introduction There are many factors involved in the formation of relationships, proximity, exposure and family, similarity, physical attractiveness, complementarily, competence and reciprocal liking. In this investigation, the research will explore attractiveness, specifically the match hypothesis. Zuckerman et al (1995) reported that the more attractive a person seemed to be, the more positive was another's overall impression of that person. Symons (1979) showed that a woman's physical health, age, and uniqueness are attractive to men whereas a man's status, height, skills, and abilities are attractive to women. Berry and Miller (2001) found that males rated physical attractiveness as the best predictor for higher quality interactions with woman, while woman rated sociability as the most important factor for men. A study was carried out by Walster et al in 1966 known as the 'computer dance study'. 752 'freshers' took part. First they were told to fill in a questionnaire, after which they were told that they had been allocated an ideal partner for the evening of the dance. These pairings however, had been made at random on basis of their physical attractiveness. Students were asked how much they liked their date and if they wanted to see them again. They found that physical attractiveness was the single biggest predictor of how much each date had been liked by both male and the female participants. The desire of another date was determined by the attractiveness of the female, irrespective of the attractiveness of the male. When we see a person in the street we automatically rate that person's attractiveness, whether we do it consciously or unconsciously. The matching hypothesis is a popular psychological theory proposed by Walster et al. 1966, on what causes people to be attracted to their partners. It claims that people are more likely to form long- lasting relationships with people who are roughly equally as physically attractive as themselves. ...read more.

4) You will do this by placing a Y (yes) or an N (no) next to the number of the couple's photographs. (Appendix) Before participating, people will be given a sheet of paper that briefs them about what kind of investigation they are partaking in, below is what it will say: Briefing: "You are now about to participate in a psychological study, you have the right to withdraw at any time during this investigation. If you do choose to withdraw, all evidence of your participation in this experiment will be destroyed. None of the data collected will be traceable back to you" After their contribution to my investigation, each participant will be debriefed. Again they will be handed a piece of paper that briefly states what I was investigating: Debriefing: "You have just finished partaking in my psychological investigation, you still have the right to withdraw any information you have given. My investigation was looking into the attractiveness of couples and the matching hypothesis. Remember none of the data I have collected can be traceable back to you, thank you for taking part' Results: The data was analysed using influential statistics. The test used was the Spearman's Rank Order Correlation Coefficient test. This test was selected as it is a two sample test of correlation for use with data that has an ratio level of measurement because they were rated scale 1-10 then converted to ordinal data and was rank ordered (see appendix). A 5% level of significance was selected as this represents the balance between making a type one and type two error. A type one error being when the null hypothesis is rejected even if it is true, and the probability of making an error like it is equal to the level of significance- 5%. A type two error is when a null hypothesis is reserved when it is actually wrong. Statistical summary: The critical value of rs is 0.9 the critical value of rs for a directional hypothesis at the 5% significant level where n= 5, my value from the spearman's rank was 1.0. ...read more.

Limitations and modifications The photographs I used were not as good as they should have been for this particular investigation of attraction because they were black and white and also not good quality photos. To overcome this problem, I would only use large photographs, around 5x5cm for future investigation. I would also use more photos, to make it a more specific test and also to make my results more significant to this area of psychology. I would use approximately 10 photos, as it would give an easy average to work with. Even though, the photographs were not as good as they should have been, there might have been a more major reason for my results. People may rate attractiveness in a totally different way. For example a person may be attracted to someone because of their body language rather than their physical attractiveness. I would conquer this by video taping a couple on their wedding day and ask participants to judge their attractiveness by more factors than just physical attractiveness. Suggestions for further research My hypothesis was that there would be a positive correlation between participants perceived scores of attractiveness of photographs of married couples. For further research into this area of psychology, I would tape several couples on their wedding day and (with their consent) get participants to rate them on many different aspects of attractiveness. Factors such as; proximity, body language, facial features, humour etc. would also be taken into consideration, with the investigation focusing on which of these would be the ultimate reason why people are attracted to others. My hypothesis would be that the more attracted the couples are to each other the longer their marriage would last. This includes factors such as proximity, body language, facial features, humour etc would be the factors to observe. For example the more body language they have towards each other it increases the rate of attraction between them. From this investigation you can extract the idea that it's not the most attractive who gets the most partner, everyone finds a partner similar to their own attractiveness. ...read more.