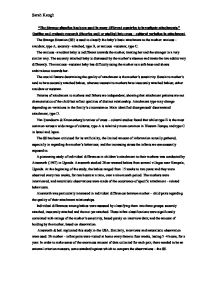 The Strange situation has been used in many different countries to investigate attachments.&quot; Outline and evaluate research (theories and/ or studies) into cross - cultural variation in attachment.

"The Strange situation has been used in many different countries to investigate attachments." Outline and evaluate research (theories and/ or studies) into cross - cultural variation in attachment. The Strange Situation (SS) is used to classify the baby's basic attachment to the mother: anxious -avoidant, type A, securely -attached, type B, or anxious -resistant, type C. The anxious -avoidant baby is indifferent towards the mother, treating her and the stranger in a very similar way. The securely attached baby is distressed by the mother's absence and treats the two adults very differently. The anxious -resistant baby has difficulty using the mother as a safe base and shows ambivalence towards her. The crucial feature determining the quality of attachment is the mother's sensitivity. Sensitive mother's tend to have securely attached babies, whereas insensitive mothers have insecurely attached babies; either avoidant or resistant. Patterns of attachment to mothers and fathers are independent, showing that attachment patterns are not characteristics of the child but reflect qualities of distinct relationship. Attachment type may change depending on variations in the family's circumstance. Main identified disorganised/ disorientated attachment, type D. Van Ijzendoorn & Kroonenberg's review of cross - cultural studies found that whilst type B is the most common across a wide range of cultures, type A is relatively more common in Western Europe, and type C in Israel and Japan. ...read more.

This suggests that attachment types are not necessarily permanent characteristics. Patterns of attachment to mothers and fathers are independent, so that the same child might be securely attached to the mother, but insecurely attached to the father (Main & Weston, 1981). This shows that attachment patterns derived from the SS reflect qualities of distinct relationships, rather than characteristics of the child. If temperament, for example, were the main cause of attachment classification, the same child should develop the same kind of attachment pattern to both parents - (Van Ijzendoorn & De Wolff, 1997). According to Main & Solomon (1986), they queried the number of attachment types. They found evidence that suggested there was a fourth type of attachment. This was named Disorganised/ disorientated attachment. It put evidence forward to claim that there were no set patterns of behaviour at separation or reunion. SS was conducted in the USA; this means that the results may have been culturally biased; i.e. only applying to the US culture. SS is artificial because it is a made up situation; mothers may have been behaving differently because they knew they were being observed, therefore behaving differently at home. It is also important to acknowledge that the environment that the study was conducted in was strange to the child and the caregiver, hence the possibility of the result of different behaviour. ...read more.

To evaluate, although there were 2000 participants involved in the study, the sample size in some countries was small. For example, only 36 children were used in the Chinese study; which is not a large enough sample to generalise across the whole of the Chinese population. Further the study does not explain why there is variation within cultures; it demonstrates that it is incorrect to assume that behaviour is the same within a culture. For example, many cultures have subcultures i.e. travellers, communes, different religions. Further, it oversimplifies the view that the UK and USA are one single culture. Thus findings are representative of culture, they assume to represent and generalise the subcultures that were sampled. The SS was tested in the USA, culturally biased - ethnocentric. Those who use SS assume behaviour has the same meaning in all cultures; in fact social constructions of behaviour differ greatly. The SS lacks external validity, which means feelings and insights may be less meaningful. The study tests infant attachment that has been used in several different countries; findings could be used to understand some of the main sub - cultural differences found within any country. To conclude, the overall consistency in attachment types means that there maybe universal characteristics that underpin infant and caregiver interaction. However significant variations show greater variations in attachments among different groups in society, than has previously been assumed. ?? ?? ?? ?? Sarah Keogh ...read more.

The writer has provided a great deal of information in this essay. However, the structure of the writing is rather disjointed and confusing. It may be helpful for the writer to plan the essay first. This would help to give more structure to the work. A starting point would be to introduce attachment theory itself and then go on to describe the research carried out by Ainsworth in the 'Strange Situation'. A more detailed description of the different kinds of attachments should follow. This would then set the scene so that the writer could then produce the evidence for cross cultural variations.