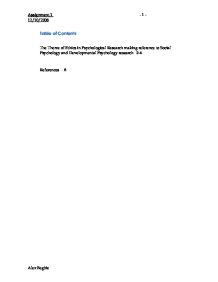 Also any child that is reluctant or does not want to take part, must not be tested or observed as it posses a potential risk to the child's psychological well being. An example in developmental Psychology research was in Watson and Rayners research "Little Albert". Watson and Rayner conditioned an 8 month old child to fear a distinctive stimulus which normally would not be feared by a child. The stimulus was a white rat, when it appeared a loud noise was produced behind Albert's back from striking a suspended steel bar with a hammer whenever he touched it. In the preliminary experimentation Albert showed no fear of the rat, it was only when the noise was associated with the rat that Albert began to show signs of fear. This experiment was unethical for a number of reasons. The first was that Albert's mother was not aware and did not give any consent for the research to take place. The second was it is considered unethical to evoke a response of fear in a laboratory unless the participant has given informed consent. Also after the experimentation had taken place Albert's fear was not extinguished because he moved away before desensitization could take place. It is presumed that, although he still must have had fear conditioned to many various stimuli, he would likely have been desensitized by his natural environments later in life. ...read more.

Participants were deceived into the exact nature of the study and made to believe that they were administering electric shocks on the learner. The subject also suffered severe stress and trauma and this was another reason why the study was heavily criticized for not taking adequate measures to protect the stress and emotional conflict they experienced. Also although the subjects wanted to stop due to the screaming and the thought that they were inflicting pain on an innocent person the subjects were urged by the experimenter to continue by simply saying "you must continue". This made it difficult for the subjects to withdraw from the experiment. After Milgrams experiments being so heavily criticized for breaking so many ethical guidelines. Milgram was forced to defend himself by explaining that the methodology was not unethical as the results obtained were completely unexpected and although the subjects appeared uncomfortable with their obedience, Milgram concluded "momentary excitement is not the same as harm". He also explained that the subjects could have left the experiment at any time, they were not physically restrained. All of the subjects were debriefed and reassured. They were shown that the learner was completely unharmed. An independent follow up survey conducted a year later that found that 84% of the subjects were glad that they had taken part in Milgrams study, 15% were neutral and only 1.3% were sorry for being part of the experiment. Around 80% of the subjects also said that they there should be more experiments like Milgrams and they had learned something of a personal value from their experience. ...read more.