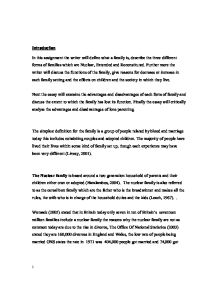 The writer will define what a family is, describe the three different forms of families which are Nuclear, Extended and Reconstituted. Further more the writer will discuss the functions of the family, give reasons for decrease or increase in

Introduction In this assignment the writer will define what a family is, describe the three different forms of families which are Nuclear, Extended and Reconstituted. Further more the writer will discuss the functions of the family, give reasons for decrease or increase in each family setting and the effects on children and the society in which they live. Next the essay will examine the advantages and disadvantages of each form of family and discuss the extent to which the family has lost its function. Finally the essay will critically analyse the advantages and disadvantages of lone parenting. The simplest definition for the family is a group of people related by blood and marriage today this includes cohabiting couples and adopted children. The majority of people have lived their lives within some kind of family set up, though each experience may have been very different (Livesy, 2001). The Nuclear family is based around a two generation household of parents and their children either own or adopted (Haralambos, 2004). The nuclear family is also referred to as the cereal box family which are the father who is the breadwinner and makes all the rules, the wife who is in charge of the household duties and the kids (Leach, 1967). ...read more.

have employment could be overburdened by the other members who are dependent on them, family members could be held back from achieving goal because of their values and commitment to other family members and clashing between members from different generations in the way their think or their work styles can sometimes lead to separation from the family. The reconstituted family also known as step family consist of step siblings, which are formed when one person who has children from a previous relationship marries or cohabit again. In 2001 step families accounted for ten per cent of the total number of families with dependent children in the United Kingdom, that is 0.7 million step families with dependent children, 0.4 million were married couple step families and 0.3 million were cohabiting couple step families living in the UK (ONS, 2005). In the same year eighty percent of these step families consist of the natural mother (ONS, 2005). The reconstituted family is common in the UK due to divorce which is easy to get and it is now acceptable to divorce and remarry, when parents change from cohabiting with one partner to another, death of one parent, separation, war and natural disasters. ...read more.

It is convenient to place blame on the parents left raising the children, rather than seeing the reality of someone striving, in the face of great odds, to give their children every opportunity they can. There are 91.4% of lone parents are mothers and 8.6% are fathers, 40% of lone parents work. Lone parents are now getting support from groups and people like Gingerbread, Ms J.K Rowling "Author of Harry Potter who is also a lone parent" and the Government who for example while lone parents are looking for work provide free child care then once work is found pays part of the child care bill. Society should support lone parents who are bringing up children single-handedly and deserve congratulations and not condemnation. In conclusion there are many different types of families in the United Kingdom, which consist of many different cultures and religions. One key factor each type of family has are Children, Children are very important to society and even more important to each family so it should not matter which family a child comes from whether it be Nuclear, Extended, Reconstituted, Lone parents or Gay families. As long as the Child or children is receiving the necessities, Love, food and the family is happy. ...read more.