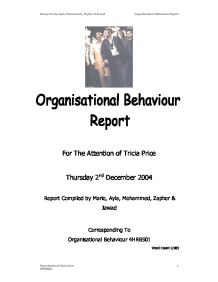 This will involve looking into the organisational structure and culture of the Oceans 11 team.

For The Attention of Tricia Price Thursday 2nd December 2004 Report Compiled by Marie, Ayla, Mohammed, Zapher & Jawad Corresponding To Organisational Behaviour 4HRB501 Word Count 2,983 Contents Page 1.0 Executive Summary 3 2.0 Introduction 4 3.0 Analysis of Organisations 5 3.1 Motivation 5 3.2 Communication 7 3.3 Experience 10 3.4 Conflict 11 3.5 Leadership 14 3.6 Strategic Planning 18 3.7 Individual Differences and Perceptions 20 4.0 Conclusion and Recommendations 24 5.0 Bibliography 27 1.0 Executive Summary: The Department of Trade and Industry (DTI)1 wished to review how the Ocean's 11 team was formed and discuss by putting a management development programme together, the organisational behavioural aspects of the group. A vast amount of research was conducted in order to put together the management development programme together to show other organisations how to prevent problems within their group and avoid issues that will be mentioned in this programme. The main objectives of this report are to research and analyse what motivates a group or team in order to perform successfully and cohesively. To look at the leadership of a group and the different roles they play in terms of power they may hold, which leads onto conflict that may occur and could cause problems within the organisation. This will also incorporate the strategy the leader, if elected, uses in order to control and influence its organisations. In addition to the above, to investigate the communication skills of a group and how significant the experience of its members is, whilst looking at the attitudes present amongst them. The report will also examine the individual differences and perceptions of a team/group and sees how they can conjure an aim and how to achieve it. This will involve looking into the organisational structure and culture of the Oceans 11 team. All the above will use associated theories and models to analyse how the team was formed and backed up with relevant references. ...read more.

A person carries out this process by applying his/her leadership attributes, such as belief, values, ethics, character, knowledge, and skills to an organisation. There are four main styles of leadership12, which organisations adapt to and use to operate their particular organisation. Management experts have gone from an autocratic approach to a very creative, participative approach. It also has been determined that different styles are needed for different situations and all leaders needed to know when to use their skills in a particular situation. The four basic leadership styles are Autocratic, Bureaucratic, Democratic and Laissez-Faire. The Autocratic Leadership Style is often considered the classical approach for most establishments. It is one in which the manager retains as much power and decision-making authority as possible. This approach relies on threats and punishment to influence employees and make them strive forward. The Autocratic leadership can be the most effective style to use when newly untrained employees who do not know which tasks to perform or which procedures to follow. The Bureaucratic Leadership Style is where the manager manages "by the book" where everything must be done according to pre-written procedure or policy. This style can be effective when employees need to understand certain standards or procedures. However, this style is ineffective when employees may lose interest in their jobs as well as fellow workers. The Democratic Leadership Style is also called the participative style as it encourages employees to be a part of the decision making. The democratic leadership style is most effective when the leader wants to keep employees informed about matters that affect them and like to involve employees in decision-making and problem-solving duties. In addition, this system encourages team building and participation. The Laissez-Faire Leadership Style, also known as the "hands-off" style, is one in which the manager provides little or no direction and gives employees as much freedom as possible. This is a successful style to use when employees are highly skilled, experienced, and educated. ...read more.

Another example for improvement would be if Danny was to give an improved role to Linus or maybe even shared his role by using Linus as prot�g�, as it seemed Linus may have been jealous of Danny's role and wanted more input, although he was the least experienced member. Therefore, if this was the case then Linus would become motivated to work that extra harder once given a different but better role, which may have resulted in a more harmonic team The above recommendations are suggested to improve an organisation's technique as they work towards a set goal. An objective is more likely to be easy if it is clearly planned out by using specific strategies and skills to apply to the team. Empirical Evidence: When discussing amongst our group of consultants, we brought up a range of different personal experiences which could also improve an organisation if met with same problems. For example, one member said they had been in conflict with another employee as they were given a higher role than them, despite having less experience. The reason for this was that the employee wanted the role rather than given it, he was motivated to perform at a higher level in relation to remain at the same level. If they had made it clear to the team then it would have avoided this argument and conflict that nearly ended up in one of the employees leaving their position. Another example was when a consultant found it hard to communicate to the leader given his domestic problems. The reason for this is that the manager seemed unbothered about its employees and how they were. They found it hard to relate to their manager and as result saw their performance being affected, which when asked about brought the issue out into the open with the manager, who was regretful for not asking how each of its employees were getting on outside the work atmosphere. This can be significant as you must be able to respect your employees and their outside lives, which should be taken into account against performance. 5. ...read more.