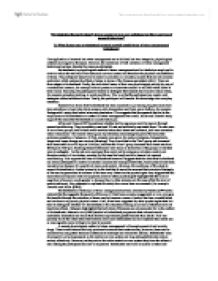 To What Extent can psychological research provide useful forms of stress management techniques?

"Psychological Research doesn't always appear to have any usefulness but this is not true of research into stress" To What Extent can psychological research provide useful forms of stress management techniques? The application of research into stress management can be divided into two categories; physiological methods and cognitive therapies. However, the usefulness of both variations of stress management techniques has been disputed by many psychologists. Biofeedback is a physiological method of stress management and is a technique employed in order to reduce the activity of the autonomic nervous system and therefore the physical manifestations of stress. The participant learns how to control involuntary or voluntary muscles that are not normally controlled, which reduces the effects of stress in terms of the illnesses associated with it. There are three stages in biofeedback. Firstly, the individual learns of their own physiological activity by way of a mechanical measure, for example a blood pressure or heart rate monitor or an EEG which looks at brain waves. Secondly, the participant is trained in strategies that research has found to reduce stress, for example relaxation training, in quiet conditions. This is so that the participant can master such strategies without additional stress. Finally, the participant will transfer this knowledge into everyday situations. ...read more.

However, Goa and Ward's research shows that they can produce other side effects such as headaches and depression. Drug therapies may therefore reduce the effects of stress and anxiety, however their usefulness as a stress management technique is limited by the number of undesirable side effects and their tendency to lead to physiological and psychological dependency. A common criticism of both the physiological method of stress management is that although they may be highly effective in treating the symptoms of anxiety this is greatly undermined by the fact that they do not recognise the significance of removing the cause of the anxiety. This is where the cognitive therapies can be said to be of greater usefulness than the physiological methods. The cognitive therapies aim to replace negative and irrational self-doubting thoughts with positive rational ones. This approach, therefore assumes that it is not the problem but the way in which the person thinks about it that is maladaptive. If one can be trained to restructure one's thoughts then the problem will simply disappear and this concept was put into practice by Meichenbaum [1977] through his "Stress Inoculation Training" programme. There are three stages to this programme. Firstly, the nature of the problem is assessed and discussed as well as the individual's perception of how best to eliminate it. ...read more.

They found that those who had experienced many stressful life events recently were more likely to suffer from medical complications in their pregnancy if they lacked psychological assets including perceived support and a social network. Tache, Selye and Day [1979] found that cancer was more common among adults who were divorced, widowed or separated than in those who were married. An explanation for this is that those who were not married lacked social support and so were more stressed leading to immunosuppression and illness and so this would support the view that social support is a successful way of counteracting the effects of stress. However, it is hard to establish causal relationships from this evidence as we can merely say that the two aspects are related and not that one caused the other. It may be that those who were divorced or separated were more vulnerable to stress than those who were married and that such a vulnerability played a role in the collapse of their marriages. If this is the case then individual differences override the importance of social support in terms of stress management. In conclusion, psychological research highlights the variety of stress management techniques and programmes as well as their respective strengths and weaknesses. However, the most appropriate method of stress management appears to depend on individual differences so a clear determination of the most useful method can not be reached. ...read more.