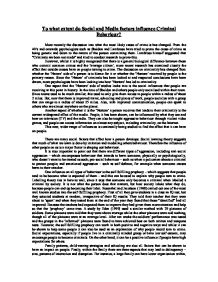 To what extent do Social and Media factors influence Criminal Behaviour?

To what extent do Social and Media factors influence Criminal Behaviour? More recently the discussion into what the most likely cause of crime is has changed. From the 40's and onwards psychologists such as Sheldon and Lambroso have tried to prove the cause of crime as being genetic and down to the nature of the person committing them. Lambroso himself suggested that "Criminals are born not made" and tried to conduct research to prove this. However, whilst it is highly recognised that there is a general biological difference between those who commit common crimes and the 'average citizen', more recent research has examined closely the effect that outside causes have on people turning to crime. The discussion on criminality has changed from whether the 'Nature' side of a person is to blame for it or whether the 'Nurture' received by people is the primary reason. Since the 'Nature' of criminals has been looked at and respected conclusions have been drawn, more psychologists have been looking into how 'Nurture' has led to criminality. One aspect that the 'Nurture' side of studies looks into is the social influences that people are receiving at this point in history. In the time of Sheldon and others people only socialised within their town. Since towns used to be much smaller, this used to only give them access to people within a radius of about 2 miles. But, now that there is improved travel, schooling and places of work, people socialise with a group that can range to a radius of about 25 miles. ...read more.

One of the most well known studies into SLT is the one carried out by Bandura. In the study 66 children saw an adult attack a Bobo doll, they were then either shown the adult being rewarded for doing so, the adult being punished for doing so, or nothing happening to him at all. Those who saw him being rewarded displayed the most aggression afterwards whilst those shown him punished showed the least aggression. One more factor that has been related as a cause for criminality is deindividuation - 'the process whereby people lose their sense of socialised individual identity and engage in unsocialised, often anti-social behaviours' Hogg and Vaughan (1998). It is said that this takes place because in society there are accepted 'norms' against aggressive behaviour, so people do not behave as such. However, when people are in a crowd that may become a mob, their attitude may adjust to that of the whole groups. According to Zimbardo there is 'individual behaviour', when people are rational and conform to society, and 'deindividuated behaviour' where people resort to primitive urges which go against society. Being part of a crowd can diminish individuality since people can feel anonymous as a crowd so there is less sense of guilt or retribution. The larger a group, the less a fear of evaluation by others and the weaker are normal controls of guilt, shame and fear. The media is the second category related to law breaking. Whilst it can be argued that this is a social factor, it is also a factor on its own and incorporates several influences on behaviour. ...read more.

The main difference between watching violence on TV and on a video game is that watching it is passive whilst playing it is active. Also, although video games show only abstract violence whilst TV shows real violence, games require more sustained attention and TV less. Studies (by Fisher (1993), Dancaster (1995), Toles (1985) and others) suggest that children can be 'addicted' to video games and violent games can lead to desensitisation and isolation. It is recognised by most psychologists that a large part of how we behave is determined by how we are influenced by the world around us. There is still recognition that 'Nature' plays a part in how people behave, but there are few who maintain the position that we behave solely because of genes. We have seen that there are many theories as to how people influence our actions and how this is important when it comes to crime and deviance. It is also important to note the effect that the media, such as TV and games, has within this area of research, since it takes a large part in our social experience. Considering that most accept that we learn by modelling others and experiencing things for ourselves, it is fair to suggest that social factors, and media factors within that, can be questioned as being also partly responsible for criminal as well as violent behaviour. They give an impression to society of what expected behaviour in certain cases is to be like and, as such, almost give people an image to live up to. Therefore it can be argued that social and media factors play a big role in influencing criminals' behaviour. Word Count: 2,607 words. ...read more.