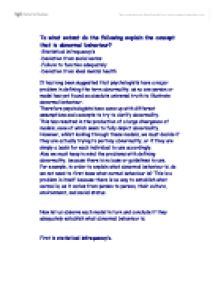 To what extent do the following explain the concept that is abnormal behaviour?

To what extent do the following explain the concept that is abnormal behaviour? -Statistical infrequency's -Deviation from social norms -Failure to function adequately -Deviation from ideal mental health It has long been suggested that psychologists have a major problem in defining the term abnormality, as no one person or model has yet found an absolute universal truth to illustrate abnormal behaviour. Therefore psychologists have come up with different assumptions and concepts to try to clarify abnormality. This has resulted in the production of a large divergence of models, none of which seem to fully depict abnormality. However, whilst looking through these models, we must decide if they are actually trying to portray abnormality, or if they are simply a basis for each individual to use accordingly. Also we must keep in mind the problems with defining abnormality, because there is no base or guidelines to use. For example, in order to explain what abnormal behaviour is, do we not need to first know what normal behaviour is? This is a problem in itself because there is no way to establish what normal is, as it varies from person to person, their culture, environment, and social status. Now let us observe each model in turn and conclude if they adequately establish what abnormal behaviour is. First is statistical infrequency's. This uses the method that frequent occurrence is normal, and infrequent occurrence is abnormal. ...read more.

Therefore, this view implies that if a person does not conform to the social norms then they are abnormal, but how can this be if they are conforming to their own personal norms, and are most definitely in excellent mental health. Also, we must realise that a certain amount of divergence from social norms is needed in order for society to grow, and function. This view does explain, to a small extent, what abnormal behaviour is, but, yet again, it is limited in how useful because it is not universal. Failure to function adequately is a model that views behaviour as abnormal if it hinders an individuals or groups well being. E.G if a person were so mentally ill that they harmed the people around them, and prevented them from 'normal' behaviour, they would considered be abnormal. Rosenhan & Seligman (1989) suggested that if a combination of the following criteria were encountered then it may suggest a psychological disorder. The criteria are: 1) Personal distress 2) Maladaptiveness 3) Irrationality 4) Unpredictability 5) Unconventionality 6) Observer discomfort 7) Violation of moral and ideal standards There is a problem with these criteria though, because they rely on a subjective judgement of other people. For example, whose moral standards must we use in order to decide if a person has violated them? The same could be said for observer discomfort, because each person is not going to be affected to the same amount by the same stimuli. ...read more.

For example, in some cultures it is still normal to eat the remains of a recently deceased relative, but to us, this would be considered extremely abnormal, and called cannibalism Benedict observed that normality was a culturally defined concept, meaning that the definition of normal and abnormal would differ between each culture according to their social norms. Research also shows that some mental disorders are specific only to certain cultures suggesting that it is the result of that societies norms and values. I.E eating disorders affect mainly women and men in the western world, perhaps because it is seen to be unacceptable to be over a certain weight, and people in the western world are more obsessed with their physical appearance, but only because societies norms have dictated that fat is bad. However, there are some disorders that are universal, such as people who cannot assume a basic social role, and are considered abnormal in any society. Also, certain mental conditions such as schizophrenia and psychopathic behaviour occurs in all cultures. Conclusion So, do any of these models actually define what abnormal behaviour is? And is it actually possible to fully explain such a diverse term in one small model? I think that although these models are very limited in their approach they do give some base to diagnose a psychological condition. The Falling of all of these models is their lack of universality and that they depend on the subjective judgements of another person, which can very rarely be achieved. ...read more.