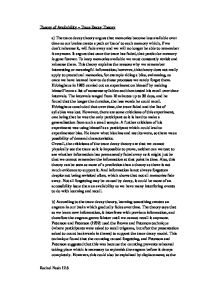 a) The trace decay theory argues that memories become less available over time as our brains create a path or ‘trace’ to each memory which, if we don’t rehearse it, will fade away and we will no longer be able to remember it anymore. It argues that once the trace has faded, that particular memory is gone forever. To keep memories available we must constantly revisit and rehearse them. This theory explains the reasons why we remember interesting or meaningful information; however, this theory does not really apply to procedural memories, for example riding a bike, swimming, as once we have learned how to do these processes we rarely forget them.

Ebbinghaus in 1985 carried out an experiment on himself by making himself learn a list of nonsense syllables and then tested his recall over time intervals. The intervals ranged from 10 minutes up to 30 days, and he found that the longer the duration, the less words he could recall. Ebbinghaus concluded that over time, the trace faded and the list of syllables was lost. However, there are some criticisms of this experiment, one being that he was the only participant so it is hard to make a generalisation from such a small sample. A further criticism of his experiment was using himself as a participant which could lead to experimenter bias. He knew what his aims and results were, so there was a possibility of demand characteristics.

Overall, the criticisms of the trace decay theory are that we cannot physically see the trace so it is impossible to prove, neither can we test to see whether information has permanently faded away as it might just be that we cannot remember the information at that point in time. Also, this theory can be seen as more of a prediction than a theory as there is not much evidence to support it. And information is not always forgotten despite not being revisited often, which shows that not all memories fade away. Not all forgetting may be caused by decay, it could be more of an accessibility issue than an availability as we have many interfering events to do with learning and recall.

b) According to the trace decay theory, learning something creates an engram in our brain which gradually fades over time. The theory says that as we learn new information, it interferes with previous information, and therefore the engram grows fainter until we cannot recall it anymore.

Peterson and Peterson (1959) used the Brown and Peterson technique (where participants were asked to recall trigrams, but after the presentation asked to count backwards in threes) to support the trace decay model. This technique found that the counting caused forgetting, and Peterson and Peterson suggested that this was because the counting prevents rehearsal taking place which is necessary to replenish the engram before it decays completely. However, this could also be explained by displacement; as the participants were counting backwards, the numbers were being stored in their short term memory and therefore displacing the trigrams.

Procedural memory shows little effect of trace decay, i.e. when you learn to swim you do not forget how even years later.

One problem with testing the trace theory is that you can never see and evidence of an imprint on the brain, so we cannot tell whether it really exists or not. Also, procedural memories are rarely forgotten, so this cannot apply to all forms of remembering.

Bahrick’s (et.al) study goes against the trace decay theory. In his experiment, Bahrick tested participant’s memory for class mates faces several years after they had graduated from high school. One out of the five pictures was a person that they had graduated with. Bahrick discovered that 90% of participants were identifying their classmates correctly, even those who had graduated more than 40 years previously. So, trace decay did not happen in this case.

c) Craik and Tulving conducted an experiment in which they tested participants by asking them three sets of questions in the categories rhyming, structural and meaningful. They were asked very simple questions such as ‘does this word start with a capital letter?’ and then the results were recorded. Craik and Lockhart decided that the semantic words they tested the participants on were processed more deeply than the other words as they had meaning to the participants. However, the recall may have been better in some participants as the words may have had a previous significance to them, for example if one of the words was ‘garden’ and their occupation involved gardening, then the recall may have been better for that word. Also, Craik and Lockhart were trying to prove that there was only one memory store, and this experiment does not prove that, as there may be three stores but each having a different capacity.

A further limitation of Craik and Tulving’s experiment is the duration, which is relatively short. It didn’t test short term memory over a period of hours or weeks. It is also limited as to whom the results can generalise to. The assumption is that only adults process this way. It doesn’t consider all of the senses, just sight, nor the individual learning style of each participant. Even the deep condition is not really meaningful, so will the information really stay in the long term memory?

The student provides a thorough discussion of Trace Decay Theory including good description and evaluation points, referring to various psychology research studies to back up their points. This essay begins with a brilliant introduction, which provides accurate background information of ...

The student provides a thorough discussion of Trace Decay Theory including good description and evaluation points, referring to various psychology research studies to back up their points. This essay begins with a brilliant introduction, which provides accurate background information of Trace Decay Theory (e.g. our brains create a path or Ã¢â‚¬ËœtraceÃ¢â‚¬â„¢ to each memory which, if we donÃ¢â‚¬â„¢t rehearse, will fade away), as well as an insight into the issues that will be explored in the essay to set the scene for the reader (e.g. This theory explains the reasons why we remember interesting or meaningful information; however, this theory does not really apply to procedural memoriesÃ¢â‚¬Â¦).

A good level of analysis is provided from the student Ã¢â‚¬â€œ for example, they use a study to discuss Trace Decay Theory: EbbinghausÃ¢â‚¬â„¢ study is described accurately, but then further evaluation is provided by outlining its limitations (e.g. experimenter bias, demand characteristics). This is a simple, but effective way, of showing critical analysis skills, for each example you make Ã¢â‚¬â€œ you should describe it, evaluate it, and link it back to the question. To achieve this fully, the student here could have added a simple sentence to explicitly relate back to the question to ensure it is clear how the information is relevant (e.g. the limitations of the experiment mean that the empirical support for Trace Decay Theory is not sound). Furthermore, the student goes on to nicely include other research studies which both support and dispute Trace Decay Theory (e.g. Bahrick et al.), this is important as it shows the studentÃ¢â‚¬â„¢s ability to objectively weigh up both sides of the discussion, and then evaluate the evidence for each.

It is good to see the student provide dates with their examples, however these can be laid out ever so slightly differently, instead of writing Ã¢â‚¬Å“Ebbinghaus is 1985Ã¢â‚¬Â it is normal practice to just write Ã¢â‚¬Å“Ebbinghaus (1985)Ã¢â‚¬Â and will save you a few words over the course of the essay! A major downfall of this essay is the lack of a concluding paragraph, this is an essential part of any essay as it is the point in which an overarching judgement can be made on all the points discussed to demonstrate a clear, and rational understanding of the topic. This essay is laid out in 3 parts (a,b, & c) which may partially explain this Ã¢â‚¬â€œ although, if it is the case I would still recommend a clear concluding sentence or two for each part.