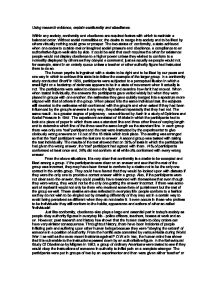 Using research evidence, explain conformity and obedience. Within any society, conformity and obedience are required factors with which to maintain a balanced order. Without social normalities or, the desire to merge into society and to be liked by others virtually nothing could grow or prosper. The two states of: conformity, a state achieved when one cedes to outside real or imagined social pressure and obedience, a compliance to an authoritative figure walk side by side. It could be said that each requires the other for existance: people would not display obedience to a higher power unless they wished to conform to a normality displayed by others as they obeyed a command; just as equally as people would not, for example, stand in an orderly queue unless a teacher or other authority figure had instructed them to do so. The human psyche is ingrained with a desire to be right and to be liked by our peers and one way in which to achieve this state is to follow the example of the larger group. In a conformity study conducted Sherif in 1935, participants were subjected to a perceptual illusion in which a small light on a backdrop of darkness appears to be in a state of movement when it actually is not. The participants were asked to observe the light and examine how far it had moved. ...read more.

Also, if the participants were not clear as to the answer, they could possibly have reasoned with themselves that even though they were wrong, they would not be the only one getting the answer incorrect. If there was some sort of reprisal it would not only be them who received some form of punishment but the rest of the group as well. These desires are also reflected in everyday life: people conform to a fashion as they do not wish to be singled out by dressing differently or they may act in a certain way to avoid being perceived as different when they do not desire it. It even occurs in those who profess to be individuals: they still conform to the habits, appearance and actions of other so called 'individuals'. Just like conformity, obedience also plays a large and essential part in today's society as people obey authority figures in everyday life - police officers, teachers, bosses at work and so on. However, past research and history has shown that the human desire to obey orders can have very sinister consequences. Throughtout history, there have been incidents of people inflicting pain and suffering upon other human beings because they were "obeying the orders" of someone in a position of authority. From the horrific acts commited by various Nazis during World War II as well as the more recent incidents against P.O.W.s in Iraq, the human mind has shown that it is vulnerable to the instructions passed down by an authoritative figure. ...read more.

95% of the nurses obeyed the instruction and were about to administer the drug before they were stopped by a hidden observer. As these experiments show, it's clear that people easily obey commands set before them by an authority figure. It is said that the situation at the time determines the 'obedience level' of a person who is given an instruction: in a situation where the authority figure is respected, trusted and well known, people will be more ready to obey an instruction set before them. Another factor in determining obedience will be the personality and past experiences of the person in question. In an investigation by Miale and Selzer in 1975, it was seen that the majority of Nazi war criminals were shown by the Rorschah tests to be characterised as having tendencies toward violence, depression, a rejection of responsibility, an absence of guilt for others and a concern for their personal status. Other aspects which may create an authoritarian personality is their upbringing - they may have been neglected or subject to a very strict childhood. From the above, it is clear that conformity and obedience are double edged swords in their relation to society. On one hand, they are what makes our society work in a civilised and efficient manner but on the other, they can be adapted to suit the needs of individuals with a much more sinister purpose. ...read more.