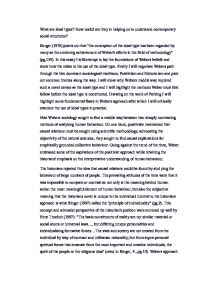 What are ideal types? How useful are they in helping us to understand contemporary social structures?

What are ideal types? How useful are they in helping us to understand contemporary social structures? Burger (1976) points out that "the conception of the ideal type has been regarded by many as the crowning achievement of Weber's efforts in the field of methodology" (pg.154). In this essay I will attempt to lay the foundations of Webers beliefs and show how the relate to his use of the ideal type. Firstly I will negotiate Webers path through the two dominant sociological traditions, Positivism and Historicism and pick out common themes along the way. I will show why Webers middle way required such a novel device as the ideal type and I will highlight the methods Weber must first follow before the ideal type is constructed. Drawing on the work of Parking I will highlight some fundamental flaws in Webers approach after which I will critically examine the use of ideal types in practice. Max Webers sociology sought to find a middle way between two sharply contrasting methods of analysing human behaviour. On one hand, positivists maintained that causal relations must be sought using scientific methodology; advocating the objectivity of the natural sciences, they sought to find causal explanations for empirically grounded collective behaviour. Going against the trend of the time, Weber embraced some of the aspirations of the positivist approach while retaining the historians' emphasis on the interpretative understanding of human behaviour. The historians rejected the idea that causal relations could be found by studying the behaviour of large numbers of people. The prevailing attitudes of the time were that it was impossible to compare or contrast as not only is the meaning behind human action the most meaningful element of human behaviour, but also the subjective meaning that the historians covet is unique to the individual. ...read more.

On its own, the "interpretative understanding of social action" is not sufficient to "arrive at a causal explanation of its course and effects" (Weber, M, cited in Campbell, T, 1981, pg.171). The task of the investigator then is to "frame a hypothesis about the nature of the social action in question on the basis of the type of conduct common to persons in such situations" (Campbell, T, 1981, pg. 174). In order to move nearer to arriving at a causal explanation of social action, Weber constructed a heuristic device that allowed him to compare empirical reality with an exaggerated reality arrived at through (in the first instance) rational deduction. He called these devices 'ideal type' although the term is not meant to apply to an 'ideal' reality. Ideal types allow the investigator to find possible causal relationships between empirical reality and the exaggerated components common to all realities in that context. This is achieved by identifying where empirical reality departs from the ideal type. Once the divergences are located it becomes more possible to locate causal relationships. The 'fit' between the exaggerated attributes and the attributes of 'reality' will be greater where there exists no external factor to upset the balance. Weber described the function of the ideal type as "the comparison with empirical reality in order to establish it's divergences or similarities to describe them with the most unambiguous intelligible concepts and to explain them causally" (cited in Ritzer, G, 2000, pg.223). By using ideal types, Weber is able to disassociate himself from the positivist's preoccupation with reducing complex and far reaching social phenomena to a singular structural conception of reality. ...read more.

The collective power of these typical elements give bureaucracy a "technical superiority over any other form of organisation" (Weber, M, cited in Parkin, F, 1982, pg.34). However, Parkin criticises the lack of explanation Weber gives for how he arrived at this conclusion. Rather than follow his own methodology and compare his ideal type with an empirical reality, Webers conclusion "is simply stated as an axiomatic truth that requires no empirical proof" (Parkin, F, 1982, pg.34). Furthermore, Webers findings show that bureaucracies tend to suppress the individual tendency toward autonomous thoughts, feelings or sentiments. Given this, Parkin questions the value of Webers use of the methods of verstehen. If a bureaucratic machine takes an individual's choice of behaviour from him, how is Weber to account for action by tapping into his subjective motivation? Webers use of ideal types is almost arbitrary in hindsight as only such a conceptual tool would allow him to examine society on the level of the individual whilst remaining faithful to structural conditions in society. Despite the criticism level at Webers methodology it is not my feeling that this fatally damages the use of ideal types. The ideal type provides the clever user with many angles with which to attack an investigation as such it has many uses, for example, Heinrich believed that "the chief function of the ideal type is to specify the hypothetical attribution of rationality to historical agents" (cited in Ringer, F, 1997, pg.116) although they are equally adept at pointing to causal relations in the present. Whether ideal types are as useful as Weber would have us believe is still open to debate, but it seems to me that Weber has found many a good use for them. ...read more.

The writer has not really spent time addressing the actual essay question and has got sidetracked. The writer should have gone into more detail explaining Weber's 'ideal type' and then should have spent more time on how this concept could be applied to contemporaryocial structures. Also the writer is at risk of being accused of plagiarism and needs to rewrite the work in the writer's own words. Sociological terms are difficult to grasp and therefore the writer has to make it clear that they understand what they are writing about. The work has room for improvement if the comments are taken on board.