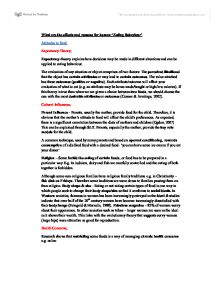 What are the effects and reasons for human Eating Behaviour?

What are the effects and reasons for human ‘Eating Behaviour’

Expectancy theory explains how decisions may be made in different situations and can be applied to eating behaviour.

The evaluation of any situation or object comprises of two factors: The perceived likelihood that the object has certain attributes or may lead to certain outcomes. The value attached has these outcomes (positive or negative). Each attribute/outcome will affect your evaluation of what to eat (e.g. an attribute may be home made/bought or high/low calories). If this theory is true then when we are given a choice between two foods, we should choose the one with the most desirable attributes or outcomes (Conner & Armitage, 2002).

A common technique, used by many parents and based on operant conditioning, rewards consumption of a disliked food with a desired food- ‘you can have some ice cream if you eat your dinner’

Religion – Some forbid the eating of certain foods, or food has to be prepared in a particular way E.g. In Judaism, dairy and fish are carefully controlled and the eating of both together is forbidden.

Although some non-religious families have religious family traditions e.g. in Christianity – fish dish on Fridays. Therefore some traditions are more down to families passing them on than religion. Body shape & size - Eating or not eating certain types of food is one way in which people seek to change their body shape/size so that it conforms to social ideals. In Western societies, thinness in women has been increasingly portrayed as the ideal & studies indicate that over half of the 20th century women have become increasingly dissatisfied with their body image (Feingold & Marzella, 1998). Fabulous magazine – 82% of women worry about their appearance. In other societies such as tribes – larger women are seen as the ideal as it shows their wealth. This links with the evolutionary theory that suggests curvy women (large hips) were attractive as good for reproduction.

Research shows that restricting some foods is a way of managing chronic health concerns e.g. celiac

Carbohydrates can improve mood. Participants were found to choose carbohydrate drinks over others to make them feel better/happier (Corsica and Spring, 2008).

Success and failure of dieting

Physiological reasons for the failure of dieting;

Boundary Model means that hunger pains keep food intake above a min level and satiety keeps food intake below a max level (Herman and Polivy, 1984). Your body has evolved to cope with chronic food shortages by lowering your metabolism and protecting fat stores in terms of starvation- extreme dieting triggers this response. When people return to normal eating they end up with more excess calories than before, which are then converted to fat.

Psychological reasons for the failure of dieting;

There is a lot of evidence to suggest that restrained eating can lead to overeating. Herman et al (2005) suggest three factors why this may be the case: Distress triggers overeating in restrained eaters (people who diet). Cravings - Dieters are more likely to suffer- this may be the cause of their diet or the result of it. Restrained eaters often have a cognitive boundary for food intake. If they exceed this boundary (called pre-load) eating is disinhibited, ‘Oh what the heck’ response.

When and how we eat is largely determined by our metabolism (the rate at which are body uses energy) and this is regulated by several physiological mechanisms: Set Point theory – biologically determined standard which our body weight is regulated. If we over/under eat our homeostatic mechanisms alter our metabolism and appetite (Keeley, 1986). If we persistently over/under eat, it is difficult for homeostatic mechanisms to work so we settle at a new weight (Passer et al, 2009) Role of hypothalamus –main area of appetite regulation. Lateral hypothalamus (LH) – when stimulated it produces hunger and when damaged results in dramatic reduction in food intake Ventromedial (VMH) – triggers a sense of fullness thereby reducing appetite.

Role of stomach – hunger was largely determined by hunger pangs (muscle contractions of an empty stomach. Contractions were measured and were found at height of hunger (Conner and Washburn, 1912)

Other mechanisms must play a role in triggering hunger (Passer et al, 2009)

Role of Ghrelin (hormone) – secreted from the walls of an empty stomach. This stimulates appetite and the secretion of Ghrelin stops when food is eaten (Berthoud and Morrison, 2008)

Ghrelin can have an effect on our mood. Starved mice had increased stress and anxiety (Lutter, 2008)

Thinking about food – influence neural activity in parts of brain involved in the control of appetite. This leads to physiological responses such as saliva (Berthoud and Morrison, 2008).

Anticipation of eating leads to dopamine being released therefore pleasure.

Born to prefer sweet/salty foods and reject bitter/sour foods – in evolutionary past this would have aided survival – unlikely to eat something that will make us ill.

Food Neophobia is being afraid of the new. This means that animals have a powerful tendency to avoid food that they have not yet encountered. An aspect of neophobia is that we tend to show a greater liking of foods once they become familiar (Frost, 2006). We can see this in young children.

We also have a built preference for meat (protein). E.g. hunter gatherers

Humans have a genetic predisposition to learn preferences for food by associating them (classical conditioning) with the context and consequences (Birth, 1999).  E.g. taste aversion.

Preference for sweet foods by:

Grill and Norgen (1973) found lab rats accept sweet foods in almost reflex like way that required no decision making. Bell et al (1973) Inuit Indians that do not have sugar in their diet, very quickly choose to eat it when it became available. Preference for meat is supported by Milton (2008) – it is unlikely that early humans could have secured enough nutrition from a vegetarian diet to evolve into the active and intelligent creatures they have become. Taste aversion is supported by Garcia et al (1955) – rats that had been made ill through radiation shortly after eating saccharin, developed an aversion to it very quickly.