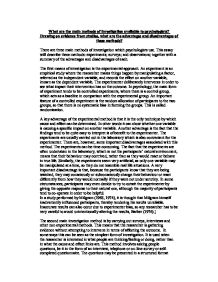 What are the main methods of investigation available to psychologists? Drawing on evidence from studies, what are the advantages and disadvantages of these methods?

What are the main methods of investigation available to psychologists? Drawing on evidence from studies, what are the advantages and disadvantages of these methods? There are three main methods of investigation which psychologists use. This essay will describe these methods: experiments; surveys; and observations; together with a summary of the advantages and disadvantages of each. The first means of investigation is the experimental approach. An experiment is an empirical study where the researcher makes things happen by manipulating a factor, referred as the independent variable, and records the effect on another variable, known as the dependent variable. The experimenter deliberately intervenes in order to see what impact their intervention has on the outcome. In psychology, the main form of experiment tends to be controlled experiments, where there is a control group, which acts as a baseline in comparison with the experimental group. An important feature of a controlled experiment is the random allocation of participants to the two groups, so that there is no systematic bias in forming the groups. This is called randomisation. A key advantage of the experimental method is that it is the only technique by which cause and effect can be determined. In other words it can show whether one variable is causing a specific impact on another variable. Another advantage is the fact that the findings tend to be quite easy to interpret is of benefit to the experimenter. The experiments are usually carried out in the laboratory which is also convenient for the experimenter. ...read more.

This puts a premium on the design and compilation of the questionnaire to be used so that questions are clear and unambiguous. This means giving careful thought to exactly what information is required; how to ask the appropriate questions to elicit that information and how to word the questionnaire that all recipients, who may cover a range of groups with variable educational attainments, understand what the question is asking. Such questionnaires are often best tested on a small pilot group, representative of the larger target group, to check that they are going to work well. This is all time consuming but unless such preparation is done, great problems can occur in trying to analyse and interpret the responses. There are limitations about what can usefully be covered in such non-experimental methods, for instance, people are not able to predict the future; interesting questions do not always give accuracy (Sherman, 1980) In some case studies, problems arise when trying to find appropriate participants, for example where a psychologist is interested in the effects of brain damage, it is only possible to study an individual patients, who already has brain damage due to a disease or serious accident, whereas it would be useful to have information about their capabilities before the disease or accident occurred. An example of this would be a patient known as HJA who sustained damage to certain areas of his brain as a result of a stroke. ...read more.

Trained psychologists are able to evoke behaviour in social setting, without actually invalidating the outcome. For example, an accomplice who requires help can be used and the response by individuals can be recorded. A black woman and a white woman were used in an experiment carried out by Bickman and Kamzan (1973) to see whether race was an issue when someone is asking for help (money), no racial differences were found. A real life social setting was used (a supermarket). This experiment was relatively easy to carry out and the results were easy to interpret. In conclusion, there are three main methods of investigation: experiments; surveys; and observations. They all have distinct advantages and disadvantages as described above. In identifying which method would be most appropriate in any particular case, psychologists would need to consider these factors and reach a judgement about which method would produce the most valuable and useful results, depending on what they are investigating. In some cases, it may be appropriate to use a combination of investigation methods, for example using a survey technique to gather data and then an experimental approach to test different hypotheses as to what cause and effect linkages there might be. It may also be, that in some circumstances, external factors, like time and money, dictate which method is to be used or which have to be eliminated. In such cases, it is important to recognise the limitations of the method adopted and consider how the disadvantages might need to be reflected in the design of the investigation or in the interpretation of the results. ...read more.