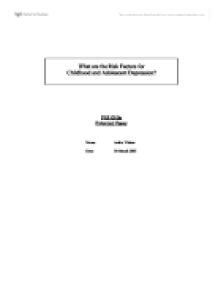 What are the Risk Factors for Childhood and Adolescent Depression?

What are the Risk Factors for Childhood and Adolescent Depression? PS51010a Extended Essay Name: Jackie Tilston Date: 30 March 2001 Popular psychology tends to blame childhood and adolescent depression on factors such as experience of divorce. In reality however the risk factors for depression across these ages are much more complicated. There are many perspectives that have been used to address childhood and adolescent depression, including developmental, psychobiological, and psychodynamic approaches. There are therefore a number of different levels of explanation and many specific explanations within each level. Although not all explanations can be discussed here, it is the aim of this essay to extract as many of the risk factors as possible that overlap at least one of these levels. To arrive at as full a description as possible it is necessary to ask why it is useful to analyse what causes depression in children and adolescents, both theoretically and practically. It is then necessary to, firstly, examine what is meant by depression generally and, secondly, to briefly analyse what the differences are between adult depression and depression in young people, before providing a short description of the parameters of childhood and adolescence. The risk factors or causes of depression within these parameters will then be described, including gender, hormones, genetic contributions, stress, attachment issues and maternal depression. It should be noted that space does not permit an exhaustive analysis of all risk factors, rather the most salient causes have been extracted. Finally, an attempt will be made to answer the question of whether there are any implications of risk factors for treatment. One theoretical reason why it is useful to analyse what causes depression is because up until recently it was not uncommon for papers on childhood and adolescent depression to come from only one perspective of psychology and for this to have detrimental implications. For example, the orthodox psychoanalytic perspective was taken and then that theory applied to the likelihood and characteristics of depression in children of different ages (Cicchetti & Schneider-Rosen, 1986). ...read more.

The general pattern of adult hormone hypersecretion does however appear to be generally to mirrored in adolescents (e.g. Robins et al., 1982; in Puig-Antich, 1986) as the Goodyer et al. (2000) study replicates. Prepubertal children on the other hand show very low levels of cortisol hypersecretion related to depression (Puig-Antich et al., unpublished data, 1979; in Puig-Antich, 1986). Although there is not enough evidence to suggest that hypersecretion of hormones actually causes depression, the evidence does suggest that the cortisol secretion may predict onset of major depression in adolescents. Neurobiology is another perspective from which studies looking at childhood depression are beginning to emanate from. It has been suggested that stress in early childhood might produce changes in the brain (Kaufman et al., 2000). Kaufman et al. (2000) have reviewed the connections between stress and changes in neurobiology, finding that preclinical studies have shown that early stress can alter the development of the hypothalamic-pituitary-adrenal axis, hypothalamic and extrahypothalamic corticotrophin releasing hormone, monoaminergic, and gamma-aminobutyric acid / benzodiazepine systems (these systems relate to the previous point made about hormone hypersecretion in relation to childhood depression). Forms of stress will be discussed below, however one source of stress, child abuse, is associated with higher rates of depression - this association seems like soon having a concrete biological basis. As Kaufman et al. (2000; p. 778) suggests: "More research is needed to understand how inherent factors interact with experiences of abuse and other psychosocial factors to confer vulnerability to develop depression". Methods of genetic research into the etiology of depression include family studies, twin studies, adoption studies and more recently molecular genetics. Family studies involve studying a proband and his or her family to identify heritability of a disorder. One such study found depression in first-degree relatives of between 7 and 30% - much higher than in the general population (Gherson, 1990; in Hammen, 1997). Another study, consisting of 900 patients and controls, found major depression in 10.4% of first-degree relatives of depressed patients, compared with 4.9% for controls (Winokur et al., 1995; in Hammen, 1997). ...read more.

stated that in practice, many services contribute to child mental health "by direct support or by alleviating risk factors". This is a clear statement regarding the connection between risk factors and treatment: clearly risk factors need to be identified before any form of prevention (for example, child and parent befriending schemes) can be undertaken. It is easy to see how stressors, as described above, could be identified. Puig-Antich (1986, p.347) takes this connection further to suggest: "... it is conceivable that onset in childhood rather than in adult life of depressive illness may have serious implications for etiology, pathogenesis, course, and treatment". Throughout the literature on childhood and adolescent depression connections have been made between etiology, identification of symptoms, diagnosis, and treatment (e.g. the Weinberg et al. [1978; in Poznanski, 1979] study - diagnostic criteria for identifying childhood depression - was in fact used to describe the efficacy of treatment). It is imperative that an interdisciplinary study is done with the specific aim of establishing links between risk factors and treatment for depression in children and adolescents. One of the main themes throughout this essay is well-summed up by the following quote: "Some of the most interesting connections between early risk factors and later psychological adjustment, connections of prime importance to prevention, cross domains" (Reiss & Neiderhiser, 2000, p. 357). Perhaps the most important conclusion to be made from a study of the risk factors for depression in children and adolescents is that these risk factors interact and it would be a rare occurrence where a cause could be identified as a sole, discrete reason for a young person becoming depressed. Interactions exist, for example, between gender and social class and between genetics and maternal depression. Despite an overlapping etiology for depression, some extent of identification of cause should be helpful for deciding on which prevention measures or treatments or combinations of treatment would best benefit the at-risk child or teenager, and for developing more appropriate diagnostic tools for children and adolescents specifically. ...read more.