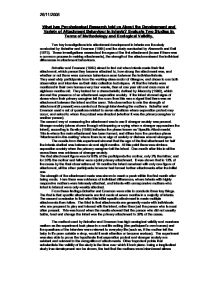 What has Psychological Research told us About the Development and Variety of Attachment Behaviour in Infants? Evaluate Two Studies in Terms of Methodology and Ecological Validity.

What has Psychological Research told us About the Development and Variety of Attachment Behaviour in Infants? Evaluate Two Studies in Terms of Methodology and Ecological Validity. Two key investigations into attachment development in infants are the study conducted by Schaffer and Emerson (1964) and the study conducted by Ainsworth and Bell (1970). These investigations researched the ages of the first attachment (to see if there was a common process in making attachments), the strength of the attachments and the individual differences in attachment behaviours. Schaffer and Emerson (1964) aimed to find out when infants made their first attachment, which person they became attached to, how strong the attachment was, and whether or not there were common behaviours seen between the individual infants. They used sixty participants from the working-class sector of Glasgow, and chose to use both observation and interview as their data collection techniques. At first the infants were monitored in their own homes every four weeks, then at one year old and once more at eighteen months old. They looked for a characteristic, defined by Maccoby (1980), which showed the presence of an attachment- separation anxiety. If the infant showed signs of stress when their primary caregiver left the room then this was a signal that there was an attachment between the infant and the carer. ...read more.

However, overall the experiment does not aid psychology to a great extent when explaining the development of attachments and the variety of behaviours shown. The study took place in 1964 and so is historically biased, meaning that the conclusions drawn from the findings may not still be applicable today. The family situation at home differs from years ago with more single parents and younger mothers. This could affect the formation of attachments, especially as multiple attachments are unlikely to be achieved if the infant is only ever in contact with one person (it's primary carer) on a regular basis. These findings strictly show how infants would make attachments in the urban setting of middle-class Glasgow in the 1960s. If the same experiment was to be carried out in the same place today, or in a different cultural area, or a different class the results may be different. As there are so many confounding variables possible we are unable to take the statements put forward by Schaffer and Emerson to be true for infants as a whole. Ainsworth and Bell (1970) formed 'The Strange Situation' in their aim to produce a method that could easily assess the quality of an infant's attachment with it's mother by provoking behaviours such as seeking comfort and exploration. ...read more.

Setting the study in a laboratory also takes away the ecological validity of the experiment as it is not long showing the results that would be expected in real life. It becomes artificial and so may show slightly differing results to that of an experiment set in the child's usual home. Like Schaffer and Emerson's experiment, this is historically, geographically and socially biased. The participants were all middle-class Americans from the 1970s. If the investigation was carried out with a different group of people the results could vary considerably. Because of this, the conclusions drawn can only be applicable to this set of participants. Both investigations offer a key insight into the way attachments are formed and the behaviours linked with attachments. This research is important as it can lead onto further research and acts as a set of comparative results to what other psychologists may learn from their own studies. As these results are biased in many ways, they cannot be used to represent infants as a whole, but they do offer interesting findings on these sets of participants (working-class Americans, and working-class Glaswegians). These results would be most useful to compare with infants from other parts of the world to see whether cultural forms of nurture or other practises found only in foreign countries have an effect on the age in which attachments are made and how strong they are. ?? ?? ?? ?? 28/11/2008 ...read more.