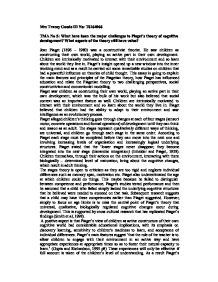 What have been the major challenges to Piaget's theory of cognitive development? What aspects of the theory still have value?

Cognition and behaviour arise from the interaction of a person with other persons and vents in the world, over time with the use of cultural tools. Vygotsky claimed that cultural tools are acquired through interacting with others, which children then adopt as their own: what was an interpersonal behaviour pattern becomes an intrapersonal cognitive process. One major way in which Vygotsky's theory is distinctive is the importance for him of instruction. He believed that the highest forms of thinking could only be achieved through appropriate instruction. Vygotsky claimed that purely abstract thinking is only found in highly technological cultures, which have a heavy emphasis on formal instruction. Whereas Piaget concluded that young children's language is egocentric and non-social, Vygotsky reasoned that children speak to themselves for self-guidance and self-direction. Because language helps children think about their own behaviour and select courses of action, Vygotsky regarded it as the foundation for all higher cognitive processes. Vygotsky believed that through joint activities with more mature members of society, children come to master activities and think in ways that have meaning in their culture. He believed that children learn best when tasks are in their zone of proximal development, a range of tasks that the child cannot yet handle alone but can accomplish with the help of adults and more skilled peers. This emphasises the role of the adult as a teacher. ...read more.

Little account has been taken into consideration of developmental change apart from when new modules are being developed. Piaget believes that processing or storage of information is domain specific, but however must recognize that there are different sensory transducers for vision, audition, touch etc. Neither the Piagetian nor the behaviourist theory takes into consideration that the infant has any innate structures or domain specific knowledge. Each grants only some domain - general, biologically specified processes: for the Piagetians, a set of sensory reflexes and three functional processes (assimilation, accommodation, and equilibration. Piaget sees the infants mind as assailed by 'undifferentiated and chaotic inputs (Piaget, 1955, as cited in Gupta and Richardson) is substantially the same. The nativist thesis sees the infant pre - programmed to make sense of specific information sources rather than one that has a chaotic mind. In conclusion it can be seen that both Piaget's and Vygotsky's theories have had a significant effect on the way that children cognitive processes have been studied and they have also had a profound effect on education. It would be fair to say that Vygotsky did not reject all of the elements of Piaget's theory but took the weak areas and strengthened them by taking into consideration socio - cultural factors and language for example. The connectionist modelling theory is domain specific and believes that children's minds are pre - programmed and organised. Children's minds are very complicated and not easy to study psychologically, but with these three different perspectives we are able to understand children's cognitive abilities better. ...read more.

This writer has clearly answered the task title and gives a real understanding of the challenges to Piaget's work and what aspects are still relevant. I think the work would read and flow better if some of the writing was more simple. The writer could try to precis what they have read and then put the main points into their own words.This is to make sure that they are not accused of plagarism as well as making it clear that they understand what they are writing about.