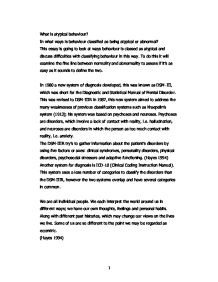 What is atypical behaviour?

What is atypical behaviour? In what ways is behaviour classified as being atypical or abnormal? This essay is going to look at ways behaviour is classed as atypical and discuss difficulties with classifying behaviour in this way. To do this it will examine the fine line between normality and abnormality to assess if it's as easy as it sounds to define the two. In 1980 a new system of diagnosis developed, this was known as DSM-III, which was short for the Diagnostic and Statistical Manual of Mental Disorder. This was revised to DSM-IIIR in 1987, this new system aimed to address the many weaknesses of previous classification systems such as Kraepelin's system (1913); his system was based on psychoses and neuroses. Psychoses are disorders, which involve a lack of contact with reality, i.e. hallucination, and neuroses are disorders in which the person as too much contact with reality, i.e. anxiety. The DSM-IIIR try's to gather information about the patient's disorders by using five factors or axes: clinical syndromes, personality disorders, physical disorders, psychosocial stressors and adaptive functioning. (Hayes 1994) Another system for diagnosis is ICD-10 (Clinical Coding Instruction Manual). ...read more.

(Gross 1992) Allman & Jaffe (1976) argue that basic divisions such as normal and abnormal are attempts by society to structure and regulate the world. They say that normal/abnormal means acceptable/nonacceptable, however it is down to whether society will tolerate it or not. According to Rosenhan & Seligman (1984), there are seven properties that can be used to help decide whether a person's behaviour is abnormal. They are as follows: - 1) Suffering 2) Maladaptiveness 3) Irrationality 4) Unpredictability 5) Vividness and unconventionality 6) Observer discomfort and 7) Violation of moral and ideal standards. These properties define abnormality, and focus on the distress of the individual. The first four are concerned with how the person is living their own life. The fifth is borderline, and the sixth and seventh are the ones that are about what behaviour is considered to be socially acceptable and what is not. (Hayes 1994) However there is a problem with these properties. There is an increasing awareness of how psychiatric diagnosis of women and some ethnic minorities has been misapplied, this is because of white middle class and predominantly male psychiatrists, who fail to understand the cultural 'norms' of the groups that their patients have come from. ...read more.

(Gross 1996) An alternative approach to define odd behaviour is to try and define normality rather than abnormality. Humanistic psychologists regard abnormal behaviour as the failure to achieve self-actualisation. The humanistic approach casts the problem in a different light, not as that of defining abnormality but as that of defining normality. Jahoda (1958), looked at 'optimal living', in other words, this is what a person needs to get the most satisfaction, enjoyment and fulfilment out of their life while also making a positive contribution to society. There were six elements for Jahodas 'optimal living'. They were: - 1) Positive attitudes towards self 2) Growth and development 3) Autonomy 4) Accurate perception of reality 5) Environmental competence 6) Positive interpersonal relationships. (Hayes 1994) To conclude; explanations for atypical behaviour have changed throughout the last fifty years and means it is very difficult to define normal and abnormal behaviour, this is shown in Rosenhan and Jahoda's experiments. We saw when we examined homosexuality that societies views are always changing, this means that classifications of atypical behaviour are always changing too. It is clear that society plays a huge part in deciding what is acceptable and non-acceptable, and therefore draws a fine line between normal and abnormal behaviour, which in my opinion cannot be drawn due to different individual people and different cultures around us. ?? ?? ?? ?? 1 ...read more.

This is a well written essay that explains in the writer's own words the difficulties around defining and diagnosing abnormal behaviour. Also the writer points out that societies' norms and values change over time and therefore their categorisation of what is 'normal' or 'abnormal' changes too.

In order to improve the score it would be advisable to spend some time on discussing other approaches to this subject, eg. behavioural and cognitive models as well as alternatives to medical classifications of atypical behaviour. The writer could also have spent some time discussing labelling theory.