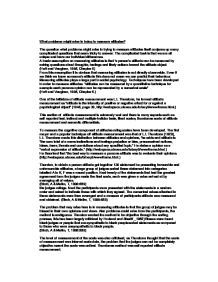 What problems might arise in trying to measure attitudes?

What problems might arise in trying to measure attitudes? The question what problems might arise in trying to measure attitudes itself conjures up many complicated questions that seem tricky to answer. The complicated task is that we are all unique and have our individual differences. A basic assumption on measuring attitudes is that 'a person's attitude can be measured by asking questions about thoughts, feelings and likely actions toward the attitude object (Hoff and Vaughan, 1995, Chapter 5) From this assumption it is obvious that measuring attitudes is not directly observable. Even if we think we know someone's attitude this does not mean we can predict their behaviour. Measuring attitudes plays a large part in social psychology. Techniques have been developed in order to measure attitudes. "attitudes can be measured by a quantitative technique for example each persons opinion can be represented by a numerical scale" (Hoff and Vaughan, 1995, Chapter 5.) One of the initiators of attitude measurement was L.L Thurstone, he termed attitude measurement as "attitude is the intensity of positive or negative affect for or against a psychological object" (1946, page 39, http://webspace.utexas.edu/brixey9/www/frame.html.) This section of attitude measurement is extremely vast and there is many aspects such as self reported test, indirect and multiple-indictor tests, likert scales, thurstones scale of attitude measurement and semantic differentials. ...read more.

The numbers on the side were not a indicator of what was presented to the participants, they would be used to attach a numerical value to responses, from the example of 5. Strongly agree etc, the highest numerical value represents the strongest unfavourable attitude. . (Birch, A & Malim, T, 1998:659) Likert quoted the following in order to certify/show that this method was appropriate to measure attitudes; 1. The statement was an expression of ;desired behaviour' rather than fact. 2. Statements should be clear, simple and straightforward, avoiding any kind of ambiguity. 3. Questions should be designed so that responses lean to one side of the continuum. 4. Statements should be scattered randomly. 5. The alternatives in multiple choice questions should involve only on attitude variable (Likert 1993) (24/11/2003, Attitude Measurement, http://webspace.utexas.eduedu/brizey9/www/4.html, page 2 of 3) The problems that Thurston encountered such as ambiguity are covered here in Likerts statements, it is like Likert learned from Thurstones problems cab changed them in this measure of attitudes scale. Likert then using the 1 to 5 method assigned values to each of the 1 to 5 outcomes, this was averaged. Seiter and Hough (1970) said; " Likert's method proved to be just as reliable and much simpler than Thurstones". ...read more.

People tend to conform in social situations, you answer by what you think other people would say or think, your inward attitude is not always tour outward attitude. An important factor in all these methods mentioned is, are the tests reliable and valid. Validity is a significant issue, who interprets is what is being measured an attitude? "Critic would say that what is actually being measured is demand characteristics" (Hoff and Vaughan, 1995, Chapter 5) Demand characteristics is when the participant respond to cues within the experimental situation for example experimenter behaviour (Birch, A & Malim, T, 1998:825) The actual definition of an 'attitude' is in itself questionable. The self reporting method has problems such as participants know they are being tested so more likely to guess the response rather than honestly respond to their attitude, this then becomes unreliable . If someone has a undesirable attitude about something they may lie to conceal this, this consequently sabotages the testing. As noted before indirect testing has ethical problems, very exploitive and deceptive. Statistic is not going to calibrate peoples attitudes and beliefs there are feeling that are un-measurable, empathy etc, when and how do you distinguish all these things. Further studies are definitely needed to improve the various methods that are about today. Peoples attitudes control our everyday life and it would be invaluable to accurately measure it. ...read more.