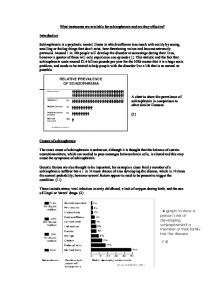 What treatments are available for schizophrenia and are they effective?

What treatments are available for schizophrenia and are they effective? Introduction Schizophrenia is a psychotic mental illness in which sufferers lose touch with reality by seeing, smelling or feeling things that don't exist, hear threatening voices and become extremely paranoid. Around 1 in 100 people will develop the disorder at some stage during their lives, however a quarter of these will only experience one episode (1). This statistic and the fact that schizophrenia costs around �3.6 billion pounds per year for the NHS means that it is a huge scale problem, and needs to be treated to help people with the disorder live a life that is as normal as possible. A chart to show the prevalence of schizophrenia in comparison to other similar illnesses. (3) Causes of schizophrenia The exact cause of schizophrenia is unknown, although it is thought that the balance of certain neurotransmitters, which are needed to pass messages between brain cells, is altered and this may cause the symptoms of schizophrenia. Genetic factors are also thought to be important, for example a close family member of a schizophrenic sufferer has a 1 in 10 more chance of also developing the disease, which is 10 times the normal probability; however several factors appear to need to be present to trigger the condition. ...read more.

Suicide is one of the leading causes of death among people suffering from schizophrenia, with at least 40% of people that have the disease attempting suicide at least once (9), normally during periods when they are psychotic and out or touch with reality, depressed, or in the first 6-9 months after they first begin taking medication. After treatment, there is a reduced suicide rate of just under 20%. (12) Economical implications of treatments for schizophrenia It's very expensive to treat and care for people with schizophrenia, and this is shown by the overall US cost of schizophrenia (in 2002) which was estimated to be around $62.7 billion (3). With treatment this cost can be reduced as generally sufferers spend less time in hospitals after taking medication, and so are able to integrate more into the community, sometimes even finding jobs. Another negative issue to consider when thinking about the economic implications, is the cost of medication, as it is very expensive. Source 13 says that "during treatment with perphenazine, the average monthly cost was $960, further by comparison, olanzapine treatment costs $1,404 per month. As most people with schizophrenia are unable to hold down jobs, this medication ends up being heavily subsidised by the government, which places a large strain on society. (13) Disadvantages of treatment One of the disadvantages of using neuroleptic drugs to treat schizophrenia is the presence of side effects, which are especially common during the active phase of the illness when a higher dose of medication is required. ...read more.

There is also the problem that a lot of the information in this book seems to be over-simplified to make it understandable to the reader, so from using this source I may have missed finding important information that is slightly more complex to understand simply because it wasn't included in the book. I also used the source http://ajp.psychiatryonline.org (13) which is updated regularly by The American Journal of Psychiatry. This suggests that the information is correct and up-to-date, rather than if I'd found the information from another internet source which may not be entirely reliable, as people are free to post whatever information they want to, and information is not verified by anyone before it is posted. The specific article I used from this website was written by a group of professional scientists, which also suggests that the information I found is reliable as they are experts in the field that I was looking into. I made sure that all of the information I found was able to be cross-referenced with another source to make sure that I hadn't found incorrect information. If the information appeared in more than one source than it is safer to assume that it is correct, as it means that it is not just someone's opinion on the topic, but contains reliable facts. I especially used this method for the statistics, such as the statistics for the suicide rate in patients with schizophrenia, where I found the same information in sources (1), (7) and (9). ...read more.