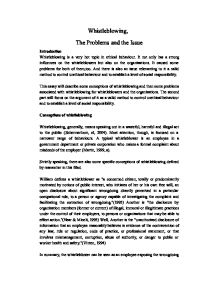 Whistleblowing, The Problems and the Issue.

However, in some cases, the whistleblowers do not prepare well or even do not have enough evidence to blowing whistles (Martin, 1999, b). The issue on whistleblowing The issue regarding whistleblowing is that does it a valid method to control unethical behaviour and to establish a level of social responsibility. Some researchers think of whistleblowing as a good way to control unethical behaviour. Miceli and Near believe that a framework within the organization to encourage internal whistleblowing is established no a level of responsibility, which includes the setting up of telephone hotlines, suggestion boxes, arbitration, internal organisational development consultantious, employee assistance program (EAPs), arbitration and an in-house panel (1994). They also referred to the International Business Machines Corporation (IBM) as an example. IBM receives up to 18,000 letters from workers making confidential complaints under a "Speak Up" program in one year (1994), although, of course, not all complaints involve wrongdoing. Some researchers believe that the internal whistleblowers can help organizations to avoid wrongdoing in organization. Figg suggests that the internal whistle blower complaints should report directly to a chief manager who can report them directly to the highest levels of management (2000). It can avoid organizations getting into trouble. ...read more.

An internal communication audit will give the organization insight into the quality and quantity of the present internal communication channels, which are essential to increase the changes for internal whistle blowing. The audit, which is usually conducted under the aegis of the public relations department, will also discover factors that obstruct or limit the use of internal communication channels. The results of the audit can function as a starting point to encourage internal whistle blowing and management of identified problems, which should form part of an issues management plan (Brujins & McDonald, 2002). And furthermore Miceli & Near suggest that it should identify clear and prepare correct communication channels and identify those to whom whistleblowers should report, the company needs to establish a code of ethics and policies and develop procedures regarding the desired actions which the organization should take after internal reporting. Everyone in the organization must understand what types of activities are considered wrong and what he or she should do when it is happened (1994). Conclusion The whistleblowing can control unethical actions in some ways, especially the internal whistleblowing. However, we should not think it so useful in every aspects of ethic. It can control unethical behaviour and to establish a level of social responsibility in some degrees, however, it should not be taken as the only valid method to control unethical behaviour and to establish a level of social responsibility. ...read more.