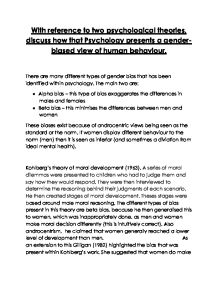 There are many different types of gender bias that has been identified within psychology. The main two are:

These biases exist because of androcentric views being seen as the standard or the norm. If women display different behaviour to the norm (men) then it is seen as inferior (and sometimes a diviation from ideal mental health).

Another theory in psychology which is very strongly gender bias, is Freud and his theory of psychosexual development. This theory states that:

If you look at the criteria for these categories, then ideal mental health for a human and a male are very similar, and include lots of the same criteria. Meaning, already, that the female is considered as being mentally unstable.

It is very difficult to find a theory or a piece of research that is not remotely gender bias in some aspect. Hence, psychologists should just accept this difference between males and females and highlight it. Not over-emphasise it but to at least acknowledge it.

Discuss the view that research practices in Psychology are culturally biased.

Cultural bias is one of many biases to be found in psychological research. If you look at different research studies in Psychology then you will see that the majority of that research has been carried out in Western society and has been applied to the rest of the world not recognising that there might be differences. Most British and American studies have used samples of participants from their own cultures, and usually students. This means that not only can the results not be applied to other cultures and the rest of the world, but they cant be applied to anyone who isnt a student.Psychology is therefore guilty of an imposed etic, trying to explain the behaviour in one part of the world, e.g. Indonesia, with theories and research that has been developed in another, America.

Diagnostic systems are also full of culture bias. If someone is having a conversation with a dead relative in our culture, then according to the DSM (Diagnostic Statistical Manual of Mental Disorders) that person is mentally ill, but if this was in Africa, where talking to dead relatives is considered normal behaviour, this assumption that the person is mentally unstable is not appropriate.

As the each country is becoming more multi-culturally attitudes need to change. Culture bias will probably always be present in Psychology and its reasearch as no one can be both English and Indian and Chinese. This could lead to some people (if they are wanting to go to the extreme) considering it to be racist. More cross-cultural research is needed. As then we can compare different cultures to our own, rather than generalising inappropriate reseach that doesn’t apply to all cultures and creating a wrong impression.