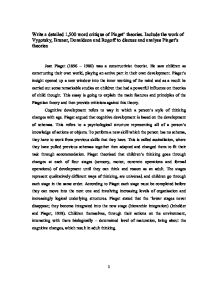 Write a detailed 1,500 word critique of Piaget' theories. Include the work of Vygotsky, Bruner, Donaldson and Rogoff to discuss and analyse Piaget's theories

Write a detailed 1,500 word critique of Piaget' theories. Include the work of Vygotsky, Bruner, Donaldson and Rogoff to discuss and analyse Piaget's theories Jean Piaget (1896 - 1980) was a constructivist theorist. He saw children as constructing their own world, playing an active part in their own development. Piaget's insight opened up a new window into the inner working of the mind and as a result he carried out some remarkable studies on children that had a powerful influence on theories of child thought. This essay is going to explain the main features and principles of the Piagetian theory and then provide criticism against this theory. Cognitive development refers to way in which a person's style of thinking changes with age. Piaget argued that cognitive development is based on the development of schemas. This refers to a psychological structure representing all of a person's knowledge of actions or objects. To perform a new skill which the person has no schema, they have to work from previous skills that they have. This is called assimilation, where they have pulled previous schemas together then adapted and changed them to fit their task through accommodation. Piaget theorised that children's thinking goes through changes at each of four stages (sensory, motor, concrete operations and formal operations) of development until they can think and reason as an adult. The stages represent qualitatively different ways of thinking, are universal, and children go through each stage in the same order. ...read more.

(Vygotsky, 1988,p74,p14). Bruner's interventionist approach, on the other hand is as distinct and contrasting from Piaget's model of learning, but that is not to say that they are not comparable because they do share lots of similarity. To begin with Bruner proposes a three-stage learning process. The enactive stage, which is learning by doing, the iconic stage, which is learning by means of images and pictures, and symbolic learning, which is learning by means of words or numbers. Though the premises are not stated, both rely upon a previous schemas or schemata for learning development to take place. Academicians normally regard Bruner's approach as a more student-centred learning approach. It does not leave the learning process totally up to the child and it calls upon the teacher to intervene in a pre emptive sort of way in order to facilitate learning, as opposed to Piaget's model, wherein the teacher provides the learning instruments for the child's learning, and monitors or views the result of the activities. Critics have often made mention of Bruner's famous challenge to teachers, that any topic can be taught to children of any age in an intellectually respectable form. For the most part, Bruner's emphasis on 'appropriate pedagogy' is not dissimilar to Piagetian thought, in that in both models, the teachers are the wholly responsible for planning the learning environment, tools and context within with the child will learn. Yet other criticisms of Piaget's view has to do with his decidedly determinist view that children's / students' abilities are of an innate nature, and therefore they may or may not be able to do tasks. ...read more.