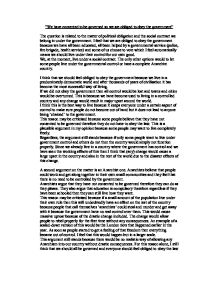 We have consented to be governed so we are obliged to obey the government Discuss this statement.

This reason may be criticised because if a small amount of the population live under their own rule then this will undoubtedly have an effect on the rest of the country because people that call themselves 'anarchists' could steal and murder and get away with it because the government have no real control over them. This would cause massive uproar because of the drastic change included. The change would allow people to rebel properly for the first time without any consequences. An example of a scaled-down version of this would be the London riots that happened earlier in the year. As soon as people started to get a feeling of that freedom then everything became out of control. I feel that this would happen but in a larger scale. This argument still stands because there would be no realistic way of allowing any Anarchism into our country without drastic consequences. For this reason alone, I still think that we should all be governed and everyone should feel obliged to obey the law and government otherwise havoc would occur. ...read more.

For this reason, an explicit view on this matter would not work and the argument still stands. After summarising the possible arguments, I feel that living in a 100% anarchist country could not work because of the situation we are in now and the change and consequences would be too great to handle. On the other hand, living in an explicit country where people could choose if they wanted to be governed would also not work in my opinion because of more specific problems such as major problems in day to day society and the problem that our country would undoubtedly split into two separate countries, one being the Anarchists and the other; people who wanted to be ruled. To conclude, we have consented to be governed because we live on governmental land and we follow governmental laws and should therefore feel the consequences if we break these laws. Consequently, people who believe that they are above the government should either leave the country completely or feel the consequences otherwise there would be no control and therefore no society or community. ...read more.