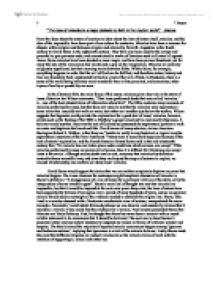 "The idea of miracles is a major obstacle to faith in the modern world" - discuss From the ideas about the nature of creation to ideas about the laws of nature itself, miracles, and the idea of the impossible, have been part of our culture for centuries. Miracles have been a measure for dispute within religion and between religion and rationality, from St. Augustine in the fourth century to David Hume in the eighteenth century. They have also been used by the corrupt and powerful to gain perverse ends, and romanticized in works of literature such as Caxton's Legenda Aurea. Some miracles have been derided as mere magic, and have been proven fraudulent, yet for many the idea of the miraculous has maintained a grip on the imagination. Miracles are certainly religiously significant, but their meaning varies between faiths. Within Islam, for example, everything happens in order that the will of God can be fulfilled, and therefore nature, history and time are absolutely fluid, constructed by God as a test of the will of God. In Hinduism, there is a sense of the world being infinitely more wonderful than is first perceived, and sometimes, other layers of reality or possibility are seen. In the Christian faith, the main focus of this essay, miracles play a key role in the story of Jesus. ...read more.

However, there is a fascinating comment in the Jewish Talmud, which says, "It is as wonderful to watch the support of the family for somebody in trouble as it is to see the parting of the red sea". In Hebrew, 'mopet' is the word used to mean 'miracle'. It can be translated roughly to the words 'wonder' and 'sign', and often miracles in the New Testament are 'signs' indicating the character of Jesus, the promised one, and his demonstration of Gods 'wonder'. For example, there is a parable where Jesus is in a boat with his disciples on the sea of Galilee, when a huge storm begins to swirl and creates towering waves. Jesus says a word and everything is calm, and this is meant to show that in Jesus there is the capacity to inhabit the power of the creator God. The apostle John said tales of miracles such as this are not just idle stories to impress, but that they help us to "believe that Jesus is the Christ, the Son of God" (John 20:31). Perhaps it is these symbolic truisms and signs in miracles which are necessary to Christianity, not just the literal belief in its occurrence. It seems that attempts at rationalizing miracles in the Judeo-Christian tradition have been largely fruitless to the believers, as ordinary miracles of love, care and compassion are just as impressive as dramatic nature-defying ones. ...read more.

Tolkein, some of the most intelligent and best-informed people he knew, we supernaturalists. Following his conversion, C.S. Lewis and others like him argued that miracles are reasonable and plausible. This polarity of worldview is framed by John Lafarge's comment that, "For those who believe in God, no explanation is needed; for those who do not believe in God, no explanation is possible". It might seem to an atheist that the idea of God performing miracles is extremely improbable - surely an omnipotent God has no need for miracles, and even if it were to demonstrate His 'divine power', surely He could do something incontrovertible instead of conjuring obscure 'signs'. Clearly, thoughts of aerial phenomena, levitation and healing powers are deep rooted in the human psyche. In the age of magic they were prominent and overt. With the development of organized religion, they became refined and submerged, but the strong primeval element has never been far below the surface. Now, with the decline of organized religion, they have resurfaced in technological guise, employing the language of spacecraft and pseudoscience. Perhaps therefore, the idea of miracles is not so much an obstacle to those who already believe or who have an attraction to the supernatural, but far more so to the modern skeptic. It is ultimately a matter of faith, but for the religious the idea of miracles is not an obstacle, rather it is a celebrated and exciting dimension of some of the world's major religions. ...read more.