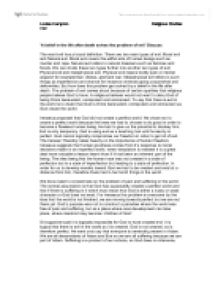 'A belief in the life after death solves the problem of evil' Discuss The word evil has a broad definition. There are two main types of evil; Moral evil and Natural evil. Moral evil covers the willful acts of human beings such as murder and rape. Natural evil refers to natural disasters such as famines and floods. We can divide these two types further into another two types of evil; Physical evil and metaphysical evil. Physical evil means bodily pain or mental anguish for example fear, illness, grief and war. Metaphysical evil refers to such things as imperfection and chance for instance criminals going unpunished and deformities. But how does this problem get solved by a belief in the life after death. The problem of evil comes about because of certain qualities that religious people believe God to have. A religious believer would not want to deny God of being Omni benevolent, omnipotent and omniscient. To say that there is evil in the world is to doubt that God is Omni benevolent; omnipotent and omniscient as God create the world. Irenaeus proposed that God did not create a perfect world. He chose not to create a perfect world because he knew we had to choose to do good in order to become a flawless human being. ...read more.

When we die a replica body will be created and our personality would be transferred to that body. The replica would have memories of dying. The only difference would be that the replica would have new experiences of what will happen. We will have memory and psychological continuation, not physical continuation. For this to happen there must be a minimum of two worlds. The universal conscious God sees both. I only see one, the one I am in. There could be more than two worlds. John Hick also goes onto say that we are all recreated in heaven and hell. If we are good we will go to heaven and if we are bad then we will go to hell. John Hick shares a similar view to the Christian View. Christians believe that there is a heaven and hell. When we die Christians believe that there will be a judgment. In this, everyone's life will be evaluated. We will either go to heaven or hell. Hell, in Christian beliefs is a place in which the soul suffers the consequences of sin. Hell is defined as the place or state of punishment. Christianity views hell as a place of eternal torment. Hell is for those who have been bad in this life. Heaven is the opposite of hell. ...read more.