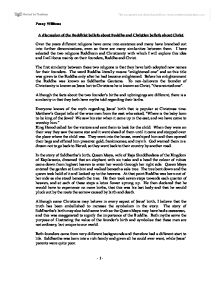 A discussion of the Buddhist beliefs about Buddha and Christian beliefs about Christ Over the years different religions have come into existence and many have branched out into further denominations, even so there are many similarities between them. I have selected the two religions Buddhism and Christianity with which I will explore this idea and I will focus mainly on their founders, Buddha and Christ. The first similarity between these two religions is that they have both adopted new names for their founders. The word Buddha literally means "enlightened one" and so this title was given to the Buddha only after he had become enlightened. Before his enlightenment the Buddha was known as Siddhartha Gautama. To non-believers the founder of Christianity is known as Jesus but to Christians he is known as Christ, "the anointed one". Although the facts about the two founder's births and upbringings are different, there is a similarity in that they both have myths told regarding their births. Everyone knows of the myth regarding Jesus' birth that is popular at Christmas time. Matthew's Gospel tells of the wise men from the east who asked, "Where is the baby born to be king of the Jews? We saw his star when it came up in the east, and we have come to worship him." ...read more.

You should not live in poverty so you can not feed yourself, clothe yourself etc but you should not indulge yourself either. After Siddhartha had gained enlightenment and became a Buddha, he decided to teach others how to overcome the suffering that exists in the world as he has done. Both the teaching of Jesus and the Buddha was passed on by word of mouth for some period of time. Neither of the founders wrote down any of their own teachings. The majority of records of the Buddha's teaching start, logically, with his First Sermon (the Deer Park Sermon) on the Four Noble Truths. However, this sermon was given to five ascetic spiritual specialists and can occasionally give people the idea that Buddhism is somewhat depressing and complicated. When speaking to everyday people the Buddha did not begin with the Noble Truths but with "morality, giving, heavens and detachment". He taught about karma, and how we could improve our and other people's lives by living a moral and responsible life. This is very comparable to how Jesus taught. His most famous sermon, The Sermon on the Mount, was spoken to his disciples and can also be quite hard to digest. Yet when preaching to ordinary citizens he often told stories or parables which were easy to listen to and understand, but which also had a meaning to them. ...read more.

Buddhist and Christians also have dissimilar attitudes to suffering. To Buddhist, suffering is something that just has to be accepted and it is something that is in the mind but can be conquered by becoming enlightened and therefore overcoming desire. Suffering can be seen as a starting point for the religion, without suffering there would not be much point in becoming enlightened. Christians take a different view on suffering. They see it as something that is real, as opposed to being in the mind, and you can only escape it by following God and eventually entering heaven. They believe that God sent Jesus to die for human beings, suffer instead of us and to pay for our sins. The last major difference between the two religions is how the two founders viewed themselves. Jesus claimed that he was the Son of God and that he should be followed and worshiped. Buddha, on the other hand, did not desire worship of any kind; he just wanted to pass his teachings on so that other people could learn how to conquer suffering. At a glance Buddhism and Christianity seem to be extremely different religions, and the Buddhist beliefs about Buddha and the Christian beliefs about Christ do not appear to be connected in any way, and although there are a few differences I have found that there are more similarities between their founders than at first meets the eye. ...read more.