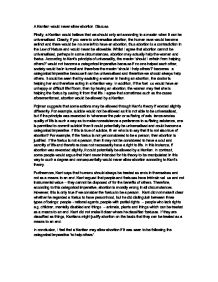 A Kantian would never allow abortion. Discuss. Firstly, a Kantian would believe that we should only act according to a maxim when it can be universalised. Clearly, if you were to universalise abortion, the human race would become extinct and there would be no one left to have an abortion, thus abortion is a contradiction in the Law of Nature and would never be allowable. Whilst I agree that abortion cannot be universalised, perhaps in some circumstances, abortion may actually help the woman and foetus. According to Kant's principle of universality, the maxim 'should I refrain from helping others?' would not become a categorical imperative because if no one helped each other, society would be in turmoil and therefore the maxim 'should I help others?' ...read more.

Pojman suggests that some actions may be allowed through Kant's theory if worded slightly differently. For example, suicide would not be allowed as it is not able to be universalised, but if the principle was reworded to 'whenever the pain or suffering of existence erodes quality of life is such a way as to make nonexistence a preference to suffering existence, one is permitted to commit suicide' then it could potentially be universalised and could become a categorical imperative. If this is true of suicide, then who is to say that it is not also true of abortion? For example, if the foetus is not yet considered to be a person, then abortion is justified. If the foetus is not a person, then it may not be considered to have a soul and sanctity of life and therefore does not necessarily have a right to life. ...read more.