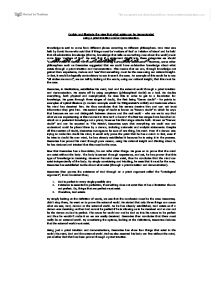 Explain and illustrate the view that what exists can be demonstrated using a priori intuition and/or demonstration. Knowledge is said to come from different places according to different philosophers. One view was held by David Hume who said that if things must be 'matters of fact' or 'relation of ideas' and he held that all substantive knowledge (that is, knowledge that tells us something new about the world) must come from 'matters of fact'. He said that if a statement did fit into these categories we should "Commit it then to flames: for it can contain nothing but sophistry and illusion". However, some other philosophers such as Descartes suggested that we could have substantive knowledge about what exists through a priori intuition and demonstration. This means that we can, through knowledge not gained from experience, deduce and 'see' that something must be the case using our rational insight. In fact, it would be logically contradictory to say it wasn't the case. ...read more.

The first two stages have launched an attack on a posteriori knowledge not a priori; however his third stage attacks both. Known as "Demon doubt" and can be equated to 'The Matrix', Descartes says that everything we could see and understand could be placed there by a demon, including axiomatic and analytic statements. Despite all this mention of doubt, Descartes manages to be sure of one thing, his mind. Even if a demon was trying to make him doubt his mind, it would only prove the point that he has a mind! In fact, even if he tries to doubt his own mind, he has already established it because he is using it in the process. Descartes has proved his mind through pure reason, using his rational insight and thinking about it, he has deduced and intuited that this must be the case. ...read more.

Descartes, didn't stop there, he went on to prove the external world. He stated that only three things can cause what we see; God, demon or the external world. As he has already established, God exists so if a demon was deceiving us then God cannot be perfect if he is allowing us to be deceived and so can not be the demon as God is perfect. The cause for world can not be God as it is his nature to be perfect and thus he wouldn't make it so we are easily deceived. Descartes then concludes that there must really be an external world. By considering the options, looking at the definitions, Descartes deduces that the external world must exist. Using just a priori intuition and demonstrations, Descartes has show four things that exist in the world; his mind, God and the external world. He has also asserted his body can live without the mind, yet another fact that has been proved through a priori intuition. ...read more.