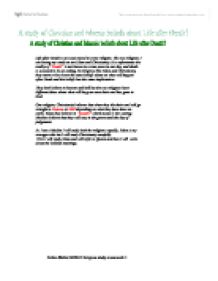 A study of Christian and Islamic beliefs about life after Death?

Life after Death is an issue raised in every religion. The two religions I am basing my study on are Islam and Christianity. It is unfortunate the reality of "Death" is not known in a true sense in our day, and death is assumed to be an ending, In religions like Islam and Christianity, they more or less have the same beliefs about on what will happen after Death and the beliefs has the same implications. They both believe in heaven and hell but the two religions have different ideas about what will happen once their soul has gone to God. One religion, Christianity believes that when they die their soul will go straight to Heaven or Hell depending on what they have done on earth. Islam they believe in "bazark" which means's the waiting. Muslims believe that they will stay in the grave until the day of judgement. As I am a Muslim I will study both the religions equally, Islam is my stronger side but I will study Christianity carefully. First I will study Islam and will refer to Quran and then I will write about the biblical teachings. Islam is a complete way of life. It is the guidance provided by Allah, the creator of all things. It covers all aspects of life and death. Muslims believe that everyone is born Muslim and the people who believe in other Religions are converted to that religion and when or if they become Muslim they are reverting to Islam, which means the are coming back to Islam. The five pillars of Islam include the Shahadah. A Muslim declares his faith by Reciting. This Arabic word mean: "There is no god but Allah; Muhammad is the Messenger of Allah". The book of Islam is the Quran, which is the direct word of Allah and Tawhid (oneness of Allah), Risalah (prophethood) and Akhirah (life after death) ...read more.

Muslims believe in Jahannam as a place of no mercy, it is a place were your worst nightmare comes true, a place made out of fire and hot lava that no physical body can take. I am a Muslim and my parents always told me if I do bad things like steal I will be forbidden to from Janna and sent to (Jahannam) were my soul will suffer and be killed hundreds of times. So Jahannam is the consequence of what we do in this life that is why the Quran says sacrifice this short journey for the next eternal life. Death, it is only the beging not the end and what we get in the next life depends on what we do. When we die our feet, tongs, fingers will testify for the deeds we have committed and the angels on our shoulders will open up the book "this is your life" in front of us not in front of Allah because Allah is all knowing and Allah will judge us whether we go to heaven or hell. The Quran says. "On the day when their tongues, their hands and their feet shall testify against them touching that they were doing. Upon that day Allah will pay them in full their just due, and they shall know that Allah is the manifest Truth." Christianity is like Islam it has its differences and it has it agreements. A creed is a summary of Christian belief. They were originally used to help Christians. The three most famous Christian creeds are the apostles, Athanasian and Nicene Creed. The apostles did not write the apostle's creed. The Athanasian and Nicene creeds both come from the fourth century. I believe in god, father Almighty, And in Christ Jesus, his only-begotten son, Our Lord Who was born of the Holy Ghost and of Mary, the Virgin, Who was crucified under Pontius Pilate and buried; On the third day he rose from the dead, Ascended into heaven, And sitteth at ...read more.

The difference in Islam about the belief in life after death is that, Islam believes that when you go to your grave you stay in a state of "Barzak". Barzak is the waiting in the grave for the trumpets to blow and all mankind will be judge. In Christianity you go straight to heaven hell or a state of Purgatory depending on your good and bad actions in life on earth, if you feeds the poor, act on what your mother or farther say and do all the good things then you will be rewarded with heaven. If you do bad things like murder, rape, be curl to people all the moral things then you get hell, it is same as Islam. The difference is the basic beliefs in these two religions, in Islam basic beliefs are believing in Allah the only God, Angels of Allah, the books, messengers, the day of judgement, and life after death. Christianity also gives a belief in life after death a belief in heaven and hell. The Difference is that in Christianity you have to believe in Jesus, who they declare as the saviour and Son of God who died on the cross for everyone's sins. Also teaches us to believe in one god, which Islam teaches too. Christianity teaches the trinity, beliefs in the father, the son, and the Holy Ghost. These facts clearly say that there is not much of difference in Islam and Christianity. I think the most important point in to believe in one god and one god only; it is the faith that keeps people together and fear from god. Islam and Christianity both have same basic beliefs in life after death and they both lead to the same conclusion, which is to have faith and do good things and be mature about the steps you take in life. The bit that survives death is your soul and the physical resurrection. Physical resurrection is when you will be raised from dead on the judgement day. Farhan Shahid M20041 Religious study coursework I ...read more.