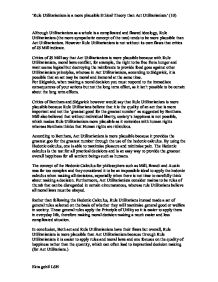 Mill also believed that without individual liberty, society's happiness is not possible, which makes Rule Utilitarianism more plausible as it coincides with human rights whereas Bentham thinks that Human rights are ridiculous. According to Bentham, Act Utilitarianism is more plausible because it provides the greatest goo for the greatest number through the use of the hedonic calculus. By using the Hedonic calculus, one is able to maximise pleasure and minimise pain. The Hedonic calculus Is the test for all practical decisions and is an easy way to provide the greatest overall happiness for all sentient beings such as humans. ...read more.