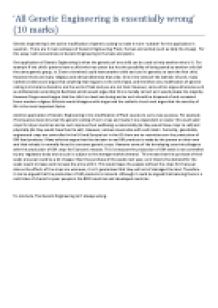 However Singer would argue that the child is a level two being and as such should be disposed of and recreated. Some modern religious Ethicists would disagree with singer and the catholic church and argue that the sanctity of life is the most important factor. Another application of Genetic Engineering is the modification of Plant species to suit a new purpose. For example if Companies deconstructed the genetic coding of corn crops and made it less dependent on water this could yield crops for dryer countries and as such improve their wellbeing- economically (as they would have crops to sell) and physically (As they would have food to eat). ...read more.

This is because the production of GM seeds is not controlled by any regulatory body and as such is subject to the average market demand. This means that the purchase of their seeds one year could be a lot cheaper than the purchase of the seeds next year, as in theory the demand for the seeds would increase and increase the price with it. This would leave the people without the crops for that year. Also as the effects of the crops are unknown, it isn?t guaranteed that they will not of damaged the land. Therefore it can be argued that the production of GM products is immoral. Although it could be argued that banning them is a restriction of choice for poor people in the BRIC countries and developed countries. To conclude, The Genetic Engineering isn?t always wrong. ...read more.