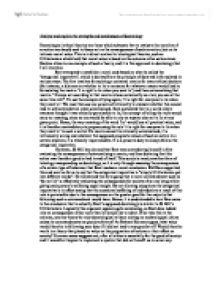 Analyse and explain the strengths and weaknesses of deontology

Analyse and explain the strengths and weaknesses of deontology Deontological ethical theories are those which advocate that to evaluate the morality of an action we should seek to focus not on the consequences of such an action, but on its intrinsic moral value. This is in direct contrast to teleological theories, such as Utilitarianism which hold that moral value is based on the outcome of an action alone. Kantian ethics is one example of such a theory, and it is this approach to deontology that I will examine. Kant attempted to establish a moral code based on what he called the "categorical imperative", which is derived from the principle of duty and is formulated in various ways. The first involves formulating a universal maxim for every ethical decision (for instance, a dilemma on whether to lie to someone for whatever reason would lead to formulating the maxim 'it is right to lie when you want to') and then universalising that maxim: "Always act according to that maxim whose universality as a law you can at the same time will". To use the example of lying again, 'it is right for everyone to lie when they want to'. We must then use our powers of rationality to evaluate whether this would lead to self-contradiction when universalised. ...read more.

Essentially, it is this distinction of bypassing the situational nature of ethics that sets it apart from teleology, as even a proponent of rule utilitarianism would permit the breaking of a moral rule in such circumstances, whereas for Kant the rule must always take precedence. He maintained that this was due to pure reason, and the necessary illogicality of a world where lying was morally permissible, so was justified by a priori reason rather than that of an a posteriori nature which teleological theories intrinsically have. Therefore, it is not emotion that dictates morality but pure reason, the product of a rational mind. However, we are then left with the conclusion that a good action is propelled by cold logic, which is somewhat at odds with the more traditional ideal that a good action is done for reasons such as compassion or for the good of humankind, and we are still left to answer Herman's question of what is it then that makes this illogicality 'bad' or 'good' if not its consequences for a hypothetical society? This is a question which I am not sure the theory answers. Mary Warnock criticised Kant's theory for attempting to divorce morality from such values as compassion, and argued that "separation of reason from all other human faculties and propensities" was wrong as it ignored many of the other valuable responses to an ethical dilemma. ...read more.

He has already stated that God is not objectively supportable through argument, so he is speaking from personal conviction rather than academic reasoning. In any case, Kant considered that attempting to move from the world of phenomena (the spatio-temporal state of existence which we are now in) to that of 'things-in-themselves' was futile. However, he did feel that the existence of a moral law (which he firmly believed existed, and was realised hypothetically in the Kingdom of Ends) implied a God, as the manifestation of "the highest good". However, due to Kant's reliance on a theory of God which even he admits is merely a proposal and not verifiable, it is difficult to see where this leaves us with his ethical theory. If God is necessary for it to be entirely convincing, as Kant's idea that the universe must be just, and therefore God is needed as this life clearly does not offer justice, seems borne from emotion rather than reason, then the argument appears to be weakened and his ethical theory is not fully completed. However, it is difficult to see how one can justify a deontological theory without resorting to some sort of supranatural figure, as without any 'higher aim' a lack of pragmatism which Kantian ethics undoubtedly displays at times for lofty and theoretical principle can seem meaningless. ...read more.