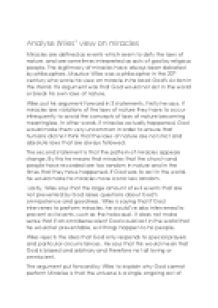 Transfer-Encoding: chunked ﻿Analyse Wiles? view on miracles Miracles are defined as events which seem to defy the laws of nature, and are sometimes interpreted as acts of god by religious people. The legitimacy of miracles have always been debated by philosophers. Maurice Wiles was a philosopher in the 20th century who wrote his view on miracle in his book God?s Action in the World. His argument was that God would not act in the world or break his own laws of nature. Wiles put his argument forward in 3 statements. Firstly he says, if miracles are violations of the laws of nature they have to occur infrequently to avoid the concepts of laws of nature becoming meaningless. ...read more.

Lastly, Wiles says that the large amount of evil events that are not prevented by God raises questions about God?s omnipotence and goodness. Wiles is saying that if God intervenes to perform miracles, he would?ve also intervened to prevent evil events, such as the holocaust. It does not make sense that if an omnibenevolent God could act in the world that he would let preventable, evil things happen to his people. Wiles rejects the idea that God only responds to special prayers and particular circumstances. He says that this would mean that God is biased and arbitrary and therefore not all loving or omniscient. The argument put forward by Wiles to explain why God cannot perform Miracles is that the universe is a single ongoing act of creation. ...read more.

John Polkinghorne also argues that Wiles? view of God?s action in the world does not reflect Christian religious experience of God. For many religious believers, God cannot be limited to what is rationally possible according to humans. Wiles argument requires that human rationality can be applied directly to God. Many people disagree that Gods actions have to conform to some form of rational order that we understand. To conclude, Maurice Wiles? view was that God does not break laws of nature in order to perform miracles in the world. Instead Wiles says that God is always acting in the world, sustaining the universe. He argues that if God broke his laws of nature they would have to be broken very infrequently or the laws would become meaningless. Also the miracles seen happen in strange patterns and if God is going to intervene he would stop evil events from happening. ...read more.