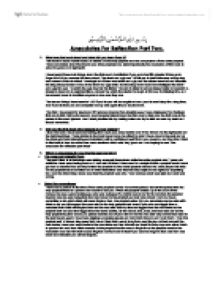 Anecdotes For Reflection Part Two. 1. What was the book about and what did you learn from it? This book is about morals based on stories on the holy prophet and the companions of the noble prophet. There are stories about the imams and other prophets too. Most importantly the conclusion of this book is about to guide us to right path. I have learnt three main things about the first one is humiliation if you go to the fifth chapter it then go to Page 52-53 it is a wonder full story about 'The short and ugly son ' I'll tell you in brief there was a king who had several of kids to which 1 amongst all of them was short and ugly and the others were tall and beautiful the king always looked down at the short and ugly child. But the king never knew how intelligent the short and ugly kid was. To which the ugly boy told his father ' He who is taller is not necessary better or superior; a sheep is clean but an elephant like a carcass' by which the started to laugh at him and humiliating him, so I have learnt never to humiliate anyone to how ever they are. The second thing I have learnt is 'LIE' if you lie you will be caught out and your lie won't stay for a long time. ...read more.

When the prophet walked up to the door of the mosque he saw a good looking guy who was crying as if a mother would cry for his son then the prophet inquired why he was crying then the man turned to the prophet and said why should I not cry i have committed a sin which Allah will never forgive. then the prophet asked 'did you associate anyone else with Allah or did you kill anyone' the man said so the holy prophet said even if your sins are bigger than a mountain than Allah will forgive them so the man said that my sins are bigger than the mountains so the prophet said are you sins bigger than the seven earths, all the sands, tree, seas, the man said yes so the holy prophet inquired would you please narrate one of your sins to me the man said why not he then said for the past seven years i have been digging up people graves and took their shrouds and i sold them. Then the prophet said 'o' sinner stay away from me or i fear that i would burn from your fire too. At that moment the man looked down and went towards the mountains and tied himself and wept for forty days and asked Allah to pardon him and then Allah revealed to the prophet that the man ...read more.

for a walk they saw a deer they sacrificed and started to eat it after they had finished Isa gave that deer back his life the man was shocked so Isa asked again where the third loaf of bread is the man still said there was only two so they went along and they saw three gold bricks Isa took one the man took one then Isa said this is the one who ate the third loaf of bread the man said greedily i ate the third loaf of bread. 4. What didn't you understand from the book? I never understood that the noble prophet revealed his prophesy till the age of 20 or higher pg 166 it says the group of Jews said to themselves that a prophet would never go near a unlawful food when the prophet was 7 they had invited him to come and eat the unlawful food And the prophet rejected it. 5. What other Islamic books will I read over the next year. I will read the following books over the next year inshallah: 1. WHY I BECAME A SHIA 2. ANECDOTE FOR REFLECTION PART 3 3. A...BEAUTIFULL...STRING...OF...INCIDENTS 4. STORIES OF THE PROPHET. I have chosen these stories as they are all Islamic and sound very interesting and really good. I have even chosen anecdote part three as I have to read this next year too. ...read more.