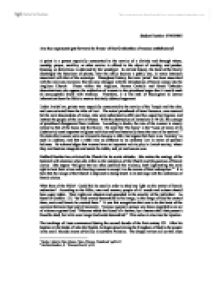 Are the arguments put forward in favour of the Ordination of women satisfactory?

Student Number: 970429865 Are the arguments put forward in favour of the Ordination of women satisfactory? A priest is a person especially consecrated to the service of a divinity and through whom, worship, prayer, sacrifice, or other service is offered to the object of worship, and pardon, blessing, or deliverance is obtained by the worshiper. In earliest history, the head of the family discharged the functions of priests; later the office became a public one, in many instances associated with that of the sovereign. Throughout history, the term 'priest' has been associated with the male sex; however, this has now changed, with the introduction of female clergy into the Anglican Church. Those within the Anglican, Roman Catholic and Greek Orthodox denominations who oppose the ordination of women to the priesthood argue that it would mark an unacceptable break with tradition. Therefore, it is the task of theologians to extract information from the Bible to answer this hotly debated argument. Under Jewish law, priests were especially consecrated to the service of the Temple and the altar, and were selected from the tribe of Levi. The actual priesthood of Israel however, was reserved for the male descendants of Aaron, who were authorised to offer sacrifice, supervise hygiene, and instruct the people of the Law of Moses. With the destruction of Jerusalem in 70 CE, the concept of priesthood disappeared from Judaism. ...read more.

Did Jesus intend for the Twelve to enter the priesthood? Or did Jesus intend to found a Church at all? These are moot points, for which there is no agreement by theologians. In argumentation in favour of female ordination, the Gospels illustrate that the role of women is significant in the works of Jesus. It seems that there were women disciples of Jesus but they did not travel with him. Luke and John tell us of Martha and Mary, the sisters of Lazarus, who lived in the village of Bethany near Jerusalem. Luke's account (10:38ff) is particularly interesting as it presents an unfamiliar view of the woman's role from that which would later be current in Christianity. In Christianity and Judaism, women were forbidden to study, however, here, Jesus overturns traditional expectations, indicating that women should not be confined to the domestic sphere. The one thing necessary for men and women is faith and attention. The statement made in Luke 10:27,"You shall love the Lord your God with all your heart, and with all your soul, and with all your strength, and with all your mind; and your neighbour as yourself..." applies to both men and women. Women are not required to be silent or kept in the background. In the Gospels they frequently voice their opinions and at times come nearer to the truth than men. ...read more.

Though Jesus was a man (he could not have been both man and woman) the humanity assumed by Him included both male and female ways of being a human. It is apparent that there are little, if any, theological arguments against the ordination of women. In the time of Jesus, women participated equally in the religious life of the community. This included participation in synagogue services and regular study sessions that were conducted in the synagogue's bet midrash (house of study). Although it may appear as a major break with tradition, the very introduction of the priesthood into Christianity was itself a significant split with the past. Like many other Jews of that time, Jesus and the first Christians did not ordain any of their number to the priesthood. The only priests they acknowledged were involved with the Temple cult, where the early Jerusalem Christians worshipped daily. The New Testament writers only speak of the priesthood of Jesus himself. Consequently, the denial by some of female ordination is quite peculiar. However, there is one factor that is confusing: Could it be argued that the ordination of women has come at a time when the Church is in a period of decline and there are fewer males interested in joining the ministry; or is it co-incidental? In other words, the introduction of female priest has been forced in order to preserve the faith. If not, then it could be a sign that the Church has once again begun a period of dramatic reform. ...read more.