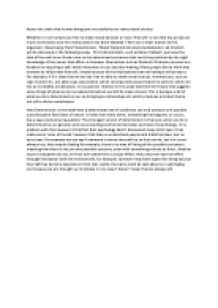 ﻿Assess the claim that human beings are not really free to make moral choices Whether or not humans are free to make moral decision or have ?free will? is one that has produced much controversy over the many years it has been debated. There are 3 main stances to this argument, those being ?Hard? Determinism, ?Weak? Determinism and Libertarianism, all of which will be discussed in the following essay. Strict determinists, such as Baron Holbach, perceive the idea of free will as an illusion due to the determined outcomes that could be predicted by the right knowledge of the causes that affect us however Libertarians such as Roderick Chisholm perceive our freedom as requiring a self, which intervenes in our decision-making. ...read more.

are able to go unpunished, which consequently would make the world in which we live an incredibly unsafe place. In my opinion I believe in the weak determinism theory that suggests some things of what we do is predetermined but we still do make choices. This is because a lot of what we do is determined on our up bringing our phenotype etc which produces a limited choice, but still a choice nonetheless. Hard Determinism is the belief that a determinate set of conditions can only produce one possible outcome given fixed laws of nature. ...read more.

For example we can say if someone is thirsty they will try to find a drink, but this is not always true, they may be fasting for example, there is no way of listing all the possible outcomes meaning that there is not just one possible outcome, even with something as basic as thirst. Another issue is that genes do not, on their own determine a unique effect, they only ever have an effect through interaction with the environment, for example, someone may have a gene for being tall, but how tall they become depends on their diet. Lastly, the same could be said about our upbringing, just because we are brought up to behave in one way it doesn?t mean that we always will. ...read more.