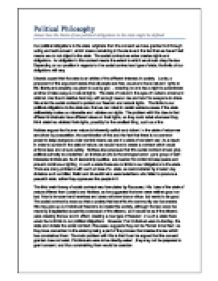 Political Philosophy Assess how the limits of our political obligations to the state might be defined Our political obligations to the state originate from the consent we have granted to it through voting and tacit consent, which means remaining in the state and the fact that we haven't left means we do not object to the state. The social contract we enter creates rights and obligations. An obligation in this context means the extent to which we should obey the law. Depending on our position in regards to the social contract and type of state, the limits of our obligations will vary. Liberals assert that the state is an arbiter of the different interests in society. Locke, a proponent of this argument states that all people are free, equal and have natural rights to life, liberty and property, as given to use by god - meaning no one has a right to subordinate another or take away our natural rights. ...read more.

Hobbes also proposes that this social contract should give political authority to a leviathan, an individual who is the strongest amongst a group of self-interested individuals. Such leadership qualities are needed for control to keep peace and prevent continuous fighting. In such a state there are no limits to our obligations to the state. There are many problems with such an idea of a state, as demonstrated by modern day dictators such as Hitler, Stalin and Mussolini who were leviathans who failed to produce a peaceful state, rather they oppressed the people in it. The third main theory of social contract was formulated by Rousseau. His idea of the state of nature differed from Locke's and Hobbes, as he suggested that men were neither good nor bad. Man is innocent and harmless and does not know vice or virtue, but wants to be good. The social contract is made so that a society that benefits the community can be created. ...read more.

Anarchists believe humans, due to their nature, would be better off with without a state. Under anarchism, there would be neither state nor an obligation to one. However, there is little evidence to suggest that humans would behave orderly under anarchy, from past experiences and study of human behaviour, it is more likely chaos would ensue. Taking this all into account, the limits to our obligations to the state depends on how our state of nature is described. For Locke, the limits to our obligation depend on the state's position in relation to our natural rights, whereas for Hobbes and Rousseau, although they have two completely different ideas regarding the state, they both state there is no limit to political obligation. On the other hand, it can be argued that there is no political obligation, as the consent which these theories rely on does not exist. Furthermore, the concept of a state according to anarchists is unnecessary, which means there would also be no political obligation. ?? ?? ?? ?? ...read more.