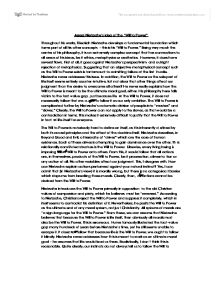 Assess Nietzsche's idea of the Will to Power

Assess Nietzsche's idea of the "Will to Power" Throughout his works, Friedrich Nietzsche develops a fundamental foundation which forms part of all his other concepts - this is his "Will to Power." Being very much the centre of his philosophy, it is an extremely complex concept that has connections to all areas of his ideas, be it ethics, metaphysics or aesthetics. However, it does have several flaws. First of all, it goes against Nietzsche's perspectivism and outright rejection of metaphysics. Suggesting that an objective metaphysical concept such as the Will to Power exists is tantamount to admitting failure at the first hurdle. Nietzsche never addresses this issue. In addition, the Will to Power as the sole part of life itself seems entirely counter-intuitive. Is it not clear that other things affect our judgment than the desire to overcome all others? He never really explains how the Will to Power is meant to be the ultimate moral goal, either. His philosophy here falls victim to the fact-value gap. Just because life is the Will to Power, it does not necessarily follow that we ought to follow it as our only ambition. ...read more.

All systems of morals are "a sign-language for the Will to Power." From these, we can assume that Nietzsche believes that because the Will to Power is life itself, then obviously all morals must also be the Will to Power. This is erroneous. Hume famously illustrated the fact-value gap many hundreds of years before Nietzsche's time, yet he still seems unable to escape it. It does not follow that because life is the Will to Power, we ought to follow it blindly. Nietzsche never addresses how this is meant to work as an ultimate moral goal - he assumes that life would lead us there. Realistically, I don't think this is reasonable. Quite clearly, our instincts do not always tell us to follow the Will to Power religiously, even in the animal kingdom (where perhaps we observe a more pure form of the instinct) where creatures have shown to be compassionate and willing to submit. Drawing from the Will to Power, Nietzsche posits his philosophical ideas. These are positive expressions of the Will to Power: the rejection of objectivity; the "New Philosopher" who is the embodiment of the Will to Power; the doctrine ...read more.

However, another interesting point by Clark is her theory of "omniperspectivism," where there can be a theoretical objective truth if one was to see a situation from all possible perspectives. This would give the Will to Power a theoretical grounding, but still fails to establish it as the practical device which Nietzsche advocates it as. One final point to make is about Nietzsche's morality - master and slave morality. He suggests that in a perfect society, the strong would live for their own existence only, exploiting the weak not only for their benefit, but also as an exertion of power. This solves the problem of the relative term "power" (as power only exists in relation to something less or more powerful). But, if life itself was the Will to Power, shouldn't the weak have it as well? Wouldn't they be living according to the same rules? This illustrates clearly the practical problem of the Will to Power, even in Nietzsche's own morality. These points I believe show that the Will to Power, although inspiring theoretically, is absurd and impossible in practice. Nietzsche does not offer enough explanation for us to accept it as a serious philosophical concept, and it eventually displays the weaknesses of Nietzsche's entire philosophy. ...read more.